NHK [J], Asahi [J], Yomiuri [J]and others reported today that about 10 of Japan’s massive anonymous bulletin board service 2-channel-related homes and offices, including its founder Hiroyuki Nishimura’s house were searched by Tokyo Metropolitan Police Department from November 2011 to March 2012, this month. It turned out “according to a person in the investigation”.
The police arrested a 54 yo drug dealer who tried to sell stimulant drugs on 2-channel in May 2011, and requested 2-channel to delete the related posts. However, the requests had never taken up and the posts were left in public. The purpose of the house search is explained “to present a real picture of how 2-channel is managed”. Besides Nishimura, several “Sakujo-nin”(=person who does deletion) were investigated. 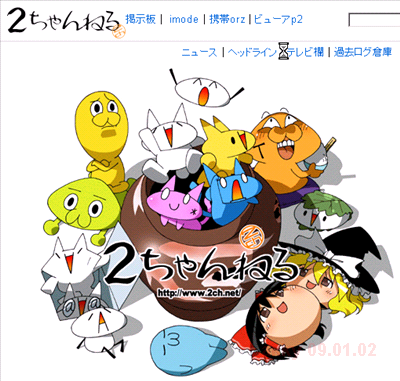 2-channel is known to have its servers in USA since it was founded in 1999. At the beginning of 2009, Nishimura announced on his blog that 2-channel was sold to Packet Monster Inc., which is a company registered in Singapore, likely to escape from libel and other lawsuits.
There is a procedure to file deletion request on a specific forum [J] on 2-channel. In the long 2-channel history, many people got mad on comments around them and asked the site to delete comments, but sometimes posters from the management team (the form of the organization, if any, is not disclosed well) cynic responses to tell them to follow the in-house request procedure. It is unknown that the metropolitan police followed the procedure when they asked it.
Nishimura’s Twitter and blog [J] are not updated today, but it is not so strange as he usually does not tweet or blog much.