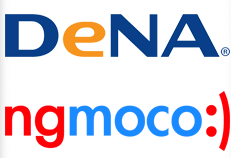 DeNA, the company behind one of the big three social networking sites in Japan, Mobage-Town (20m users in Japan), cannot be clearer on its current strategy.
It’s called international expansion.
Everyone is abuzz of today’s acquisition of Ngmoco, an US iPhone game developer for a staggering USD 400m.

The big tide in social gaming is coming, right now. We’d like to capture it and quickly become the world’s No. 1 mobile gaming platform

says Tomoko Namba, founder and CEO.
Wow. But let’s roll back in time for a minute. DeNA Global business initiatives actually started in July 2006 with the creation of its Beijing subsidiary, which launched Jia Jia Cheng, a Chinese Mobage-Town, the following year. In January 2008, the company established DeNA Global, its full-fledged international arm. Its location was not innocent: San Mateo, California.
True to its core business, MobaMingle was released the same year with more than USD 3m investment. A virtual community for mobile phones. Avatars, friends, games, blogging. A Mobile Game Town (i.e. Mobage-Town) for the US and Europe (and India a bit later), in short.
I can’t say it was mind blowingly successful, especially due to the lack of those flash-based mobile games that gave it traction in Japan. Or simply because we’re talking about markets that never got used to flash-based mobile gaming. Or even more simply since not all handsets were actually supporting Flash in the first place.
150,000 members (March 2009) might not have been braking any record, but it was a good exercise in testing the international waters.
Intelligently sensing the move towards an application-based phone ecosystem, DeNA brought its games and community to the iPhone/iPad last May. Just for its overseas users. An iteration of MobaMingle of sorts, if you want.
And things were going faster on all fronts.
DeNA took a 20% stake in the gaming platform Aurora Feint -a Ngmoco competitor- last year to facilitate distribution. It acquired IceBreaker, a US-based game publisher a few months later. Then bought Astro Ape Studios then Gameview Studios, two US-based game developers, this year. Then set up a USD 27.5m investment fund. And now that 400m deal.
USD 403m actually. 303m to be paid in November, 100m more depending on Ngmoco 2011 earnings.
403m. That makes it the world’s largest mobile social gaming platform. Or so they say [full press release in English].
403m for what? Unlocking that elusive international market.
The company plans to integrate Ngmoco’s social platform which plays nicely with both iOS and Android phones. Read that again. Or read this from the founders:

ngmoco will lead DeNA’s efforts in the Western world, including launching a new western smartphone version of the incredibly successful Social Games Network, Mobage (we say “Mo-ba-gae”) that we’re building together with DeNA.

DeNA is smart. It’s talking about OpenMobage, a platform. iPhone, Android, keitai. That’s key. If the company is able to create such a thing on mobile -think how Zynga used Facebook’s platform for its growth-, then it has a shot at being very successful.
And remember, the company’s revenue estimates for this year are about USD 1bn. That’s as much as Facebook. Good firing power, heh?

I want to believe Tomoko Namba, DeNA’s CEO. Really. But the list of Japanese tech companies that have successfully ventured abroad is dramatically short. Last time such noticeable investment happened was more than 5 years ago when Japanese mobile content giant Index Holdings bought Seattle-based Mobliss and 123 Multimedia. Or, closer to the numbers we’re talking today, when For-side bought iTouch, a mobile content provider.
Right. No one remembers.
Hence, only one name comes to mind. Rakuten.
Its acquisition of Buy.com for USD 250m -with a relatively weaker yen- is too recent to pass any judgement. But it’s one story that will allow us all to judge how Japan will do abroad this time.
What will it be?