Fast Retailing, also known as its brand name of Uniqlo, launched a Facebook integrated photo sharing community called Uniqlooks (available in seven languages) last Thursday.   It allows users to upload pictures of those wearing at least a piece of Uniqlo’s products and share them with the other users for exchanging ideas on how to coordinate clothes for better looks.   Pictures uploaded by you will be stored in your personal page function called “My Looks”, and that enables you to create a collection of pictures of you dressed up.   If the other users vote for your picture by pressing a “Like” button, it will be appeared on your Facebook page, and the highly ranked pictures according to the number of buttons pressed will be also appeared on the community’s top page.  Uniqlo’s logo is placed in the part of its product(s) in a uploaded picture, you will be taken to its order page by pressing it. 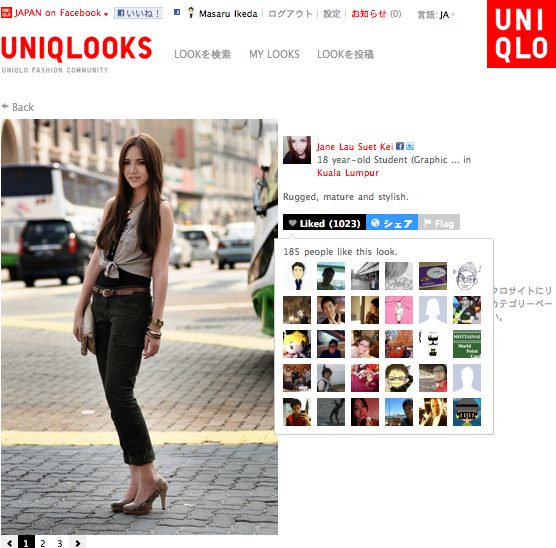 “We partnered with Facebook for having our branch at the world’s biggest online community.”, Tadashi Yanai, the founder and president of the company, explains.   “Not professional models but people in streets can be photogenic for promoting our products and developing new customers.”, the leader in charge of managing the community, Rei Matsunaga says.
In mid-March, the company plans to introduce the iPhone app for it and hold a competition to choose the best dress-up by using Facebook “Like” button counts.
See Also: