On February 8th, about two weeks ago, Facebook suspended quite a few numbers of Japanese active users who had names which do not sound like Japanese. They asked for the users their real name and copy of ID like passport. 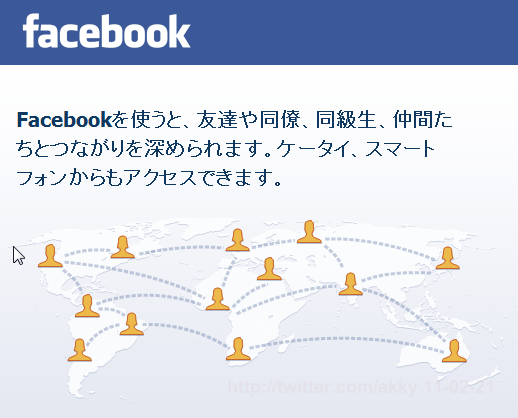 It shocked Japanese early adopters who were tasting Facebook backed by media boom, as many of them were used to use nick name and non-photo icons (e.g. illustrations, still objects, etc.).
ITMedia [J] and CNET Japan [J], who inquired Billcom, a local company who helped Facebook marketing in Japan, got replies indirectly from Facebook via Bilcom. According to them, Facebook HQ recognizes the massive banning, and said that those users were stopped because of inappropriate use, which can include registration by non-real name. To ITMedia, the reply said that Facebook won’t suspend user manually (it is done automatically by system). To CNET Japan, they answered that they could not tell whether Facebook find the pseudo name by system or by human.
Days later, some banned users came back to Facebook with new names which sound like a native Japanese name. However, some of them reported on their blog that they did not send a copy of ID. So Facebook’s crackdown might not be so harsh as it was seen on their reactivation request form.
Then, it is possible for some people to rethink, “If they resume IDs without authentic papers, how can they know the new name is real name?”

On 17th, a popular blogger/independent security hacker Hamachiya2, who was locked out from Facebook at some point (he did not mention it was the same timing or it happened before), posted a new blog which title is “An easy way to get back your Facebook account” [J].
On the article, he explained what he did to get back his account.
First, on the request form, you need to type your real name “Hamachiya Hamachi-” (in Japanese, of course). Then you get a reply in Japanese, which means,

The Facebook “profile” is for individual networking, not for company or organization. We understand that this is not on the issue you requested (Akky: what?), we suspended your account because you violated the Facebook’s term of usage.

To Facebook Team,
I am using it as an individual profile.
Thanks in advance

Facbook’s reply was longer this time, with what are real names and what are not with examples.

“Bob” and “Robert” explained in Japanese seems pretty dumb for me. Of course there are no Japanese “Robert”, Japanese do not care how it can be replaced with “Bob”. They do not show what kind of Japanese nickname is possible from their real name.
His reply again, (I don’t translate word-by-word. it is long in polite Japanese writing manner, which means inserting a lot of decent and garbage-ish phrases)

I am afraid that you might misunderstand, so I am contacting you again.
If you suspended my account because my name did not seem a real name, that is the misunderstanding.
I am living in Japan now, and of course speak Japanese. However, I am a Russian-Japanese, so my name could be very rare in Japan. That may be the reason you thought that my name was a fake name.
The right spelling of “Hamachiya Hamachi-“(in Japanese hiragana) is “Hamachiya Hamachie”, but it was because most of my friends on Facebook are Japanese, I spelled it in Japanese for them.
Thank you for your consideration on those touchy issue.
Thank you in advance.

Dear Mr. Hamachiya,
Our sincere apologies for the error and any inconvenience this has caused you.
Your account was suspended by mistake.
We resumed the account so you should be able to log in.

Hamachiya finished the post with “You should tell them when you are misunderstood.”, “Honesty is the best policy!”
The post quickly got over 1,000 bookmarks on Hatena Bookmark, which may match with 3,000 Digg (just my impression). As a result of it, “Russian-Japanese” were buzzed on Japanese web.
I did not know that he is a Russian-Japanese, and Russia has such first name and family name, but anyway, he tweeted that he had got another account suspension by Facebook. It is unknown if Facebook could get the well-ascertained fact that Hamachiya is not a Russian-Japanese, which I suspect they can, or made up another reason to lock him out.
Facebook bluffed Japanese people by using “copy of ID” request, pretended that they could force users to submit official certifications, which not many users are pleased with in Japan (I don’t know other countries). But it fails when they bent the rule from person to person. They did not check the collected ID images, just apologized and resume accounts of users who protest strongly.
As more Japanese know that the real-name policy is just a “good to follow” rule, they will be making more possible reasons but the “Russian-Japanese” line may not be so safe any more.
[Update 2011-02-23] My mistake. Hamachiya said he is “a Japanese-Russian”, instead of “a Russian-Japanese”. My sincere apology for the error.
He also tweeted [J] that after the second account suspension, what ever he inquires, Facebook never responds him.