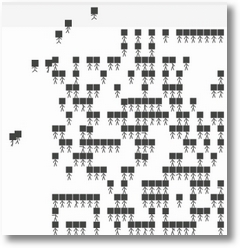 With the continual proliferation of QR Codes around the world (Robert Scoble recently wore a QR Code t-shirt at the NextWeb conference in Amsterdam), Japan continues to lead the way in the innovative ways of not only using the codes, but in creating them as well.
Recently, Cross Borders Inc. in Japan came up with the idea of QR-Code bots. This cute little service simply requests you to enter any URL and an army of tiny little bots will file unto the screen and assemble little squares neatly until they perfectly form themselves into a QR Code. Wow! The prepared code is ready to scan! Then, with a wave of the mouse, the bots scatter, only to be called again for their next assembly assignment. Cute! Cute! Cute! 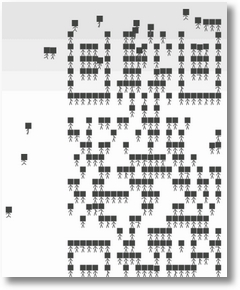 Like most of the online novelty items from Japan, the cute factor is hypnotically entertaining as the bots “jump” into place like little perfectly ordered fleas.
On a more mature scale, the final QR Code created does actually work. If you take your QR Encoded camera and point it to the screen, your phone browser will in fact be directed to whatever URL you placed into the bot.
While highly entertaining, the reality is IF you have a QR Code enabled mobile phone (like most do in Japan) the browser will direct you to where you set it to go. If you don’t have a QR Code enabled phone (which includes most phones OUTSIDE of Japan), you’re out of luck. 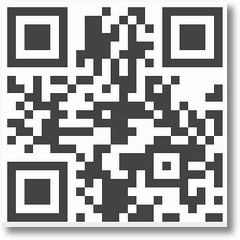 While Scoble and others are trying to bring recognition to the QR Code standard on a global scale, the decision really does sit with the vendors such as Nokia, Motorola and Blackberry as to whether this should be brought to the forefront for consumers. Until that “aha!” moment happens, QR codes will remain “one of those things they do over there in Japan”. Sad.
Also, have a look at http://www.winksite.com if you are thinking of implementing your own mobile strategy to compliment your website. It allows you to not only create the QR Code, but the whole mobile site to be properly viewed on any mobile device. Most English computer websites and blogs DO NOT translate well onto mobile devices.