In Japanese new year’s holidays, we enjoy having osechi-ryori or specially-prepared dishes to be eaten during the first three days of January.   Most dishes are cooked to be preserved for several days to a few weeks so housewives need not cook during the period.   The dishes have been traditionally cooked at home, but nowadays people purchase completely cooked products of them at department stores or by placing online delivery orders to popular Japanese restaurants. 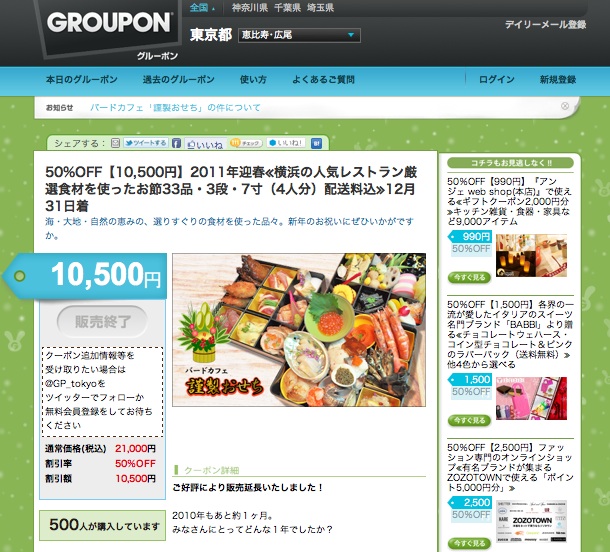 Groupon Japan[J], a Japanese subsidiary that a U.S. leading daily deal service provider set up last August by taking over IVS-backed Q:pod, introduced the special new year’s deal of the osechi meals, which is being unfavorably received on Japanese blogosphere during the holidays because almost of those who have ordered the meals are complaining that ingredients are so much differ from what have been introduced on the website.
Yokohama-based restaurant Bird Cafe introduced the deal of the osechi meals for four persons that allows you to purchase for a discount price of 10,500 yen each (regular price: 21,000 yen).   Seeing is believing.  In the pictures below, the upper one shows you what they have introduced on Groupon’s website, and the lower one shoots what a customer has actually received. 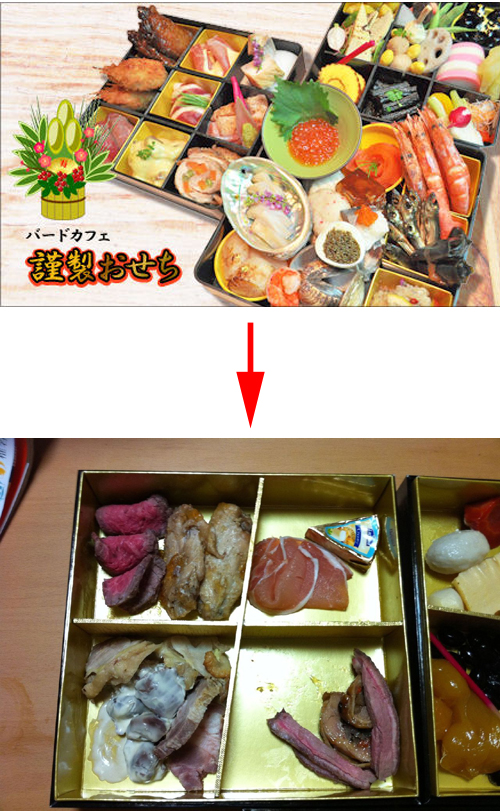 Net no Ohanashi[J], a blog focusing on Japanese blogosphere and subculture trends, interviewed Mr. Kenji Mizuguchi[J] (@gaishokubunka), the president of the restaurant about behind the scene of this incident.

Interviewer (I): Why did this happen?
Mr. Mizuguchi (M): First of all, I’m very sorry for the inconvenience this might cause our customers.   We’ve been estimating 100 orders but actually got 500 orders.   We’ve not expected such a big echo up by a Groupon promotion.   We have rolled up our sleeves and forged ahead.
I: Why did you wade right into it?
M: We were unequal to the task.   We  should have cancelled the orders when we find out we can’t serve them in an expecting way.  But we were too agitated to stop accepting the orders.
I: Did you find you would get complaints when you packed with such poor ingredients?
M: We were in two minds of canceling the orders and delivering packages (even if it’s imperfect).   We thought the contracts with the customers are our first priority.   We thought it was important to deliver the packages.
I: Has Groupon Japan advised you of how the promotion will reflect your business?
M: Not at all.   There were no daily deal service dealing with the osechi meals, Groupon Japan says.   When we asked them for it, they showed us great interest in dealing with it.   We were too agitated.   I had no direct contact with a sales representative from Groupon Japan, but our sales manager discussed with them and got a good feeling.   I just made up my mind to get it through.
I: You mentioned you had been expecting 100 orders.   Did distributing ingredients for 100 packages to 500 cause the hollowness in a package?
M: We started accepting orders last November, and got into preparing on December 26th.   We just needed much time to pack it all than expected because we got more orders than expected.   But we never decreased the portion of dishes.
I: But the pictures of the dishes that were actually delivered look so poor, don’t they?
M: Dishes were set in nine portions in the meal lacquer boxes.   But we couldn’t have sufficient number of separators for making the portions, and changed them to four portions.
I: Do you mean the total variety and volume of dishes are almost same as planned regardless of the number of the portions?
M: The volume was smaller than what has been introduced with the picture on the website.   I’m very sorry.
I: This case caused a high sensation on the Japanese netsphere such as 2 channel bulletin board.   Did you check them out?
M: I did look them over and found what they say.
I: Just learned how it came out.  But have you put any apologies on your website yet?
M: We outsource our website maintenance and cannot update it during the holidays.  We did ask Groupon Japan to contact all the customers for refund.   We’re very sorry that our customers had such an unpleasant thing on the New Year’s day.
I: Thank you for talking with us.

After the interview, Mr. Mizuguchi announced he had stepped down as the president of the restaurant as of January 1st, 2011.
See Also: