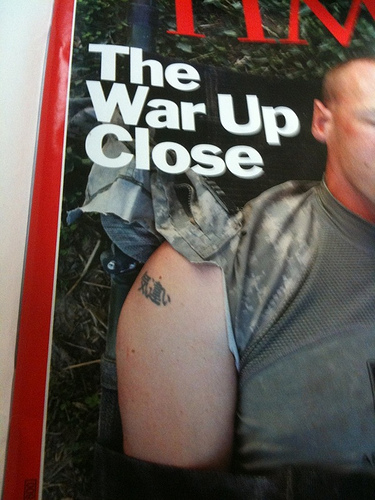 not “crazy” but “mental illness” tatoo
TechCrunch Japan reported [J] on its Japan original post that LinkedIn is seeking a Japanese translation contractor.

There is also a Japanese localization quality assurance contractor post has been posted earlier, both still seem open.
LinkedIn’s Japanese localization was once announced [J] in 2007 by Digital Garage, who helped and succeeded one of the most successful Twitter’s local adaptation, but then there were neither language localization nor visible marketing happened. If they find those two contractors soon, which should be possible in Mountain View, we may see LinkedIn Japanese in this summer 2011.
Japan is known as a barren land of business social networking services. A lot of challengers lost and left the field, whilst few social networks grew by moving to friends-nickname networking. Gree, once was a kind of university students and 20’s business network at its beginnings almost dumped its PC side service, Mixi stopped asking to use real name after countless privacy leaks years ago. Facebook Japan sees difficulty to let people use their real name. (see Facebook news covered on Asiajin)
Japan’s job market is less active than in U.S., and does not depend on individual people’s reference networks. But more people ought to leave their life-time workplace in last two decades economic stagnation, situation will be gradually closer to the U.S. If the localization does not only end with message translations, but also care with cultural difference, which should require some system-side changes, they have a good chance to be the first successful social business networking service in Japanese.

9 Out Of 10 Japanese Mobile Users Disinclined For Using Real Name
See You, CU – even the mighty Yahoo! Japan gave up within a year (which was not their first attempt)