Twitter Shogi(= Japanese Chess) by Kayac is a new web service for good-old correspondence (Japanese) chess between two Twitter users.
You can simply start a new game with @your_opponent by tweeting like,

then the service will find the new game begins, record your and your opponent’s moves.
The second word shows the player’s move, which unit to which row and column in standard Japanese chess notation. The notation is strictly ruled [J] but you should be able to handle if you play it well.
From the site, you can check the current board. Searching by two twitter accounts give you (if any) the playing or finished board. 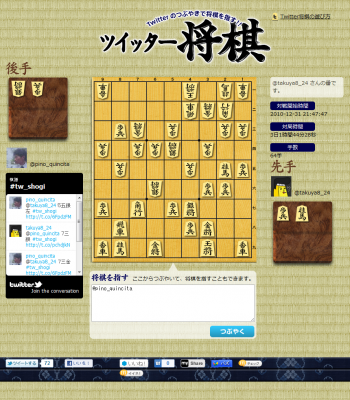 Searching Twitter by its hash tag #tw_shogi returned that there are several games were being played. 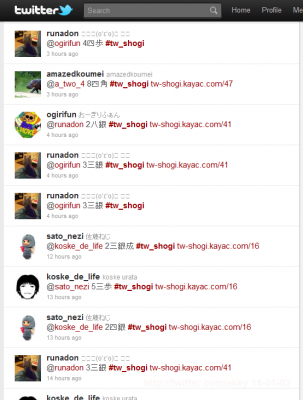 Japanese chess, one of the world’s many chess variants, has a characteristic which you may reuse your capturing unit, which makes it more complicated for computers. different from western chess, the world champion of which can be beaten by computer, there are over 100 professional players who are still stronger than machines.