Cybozu Inc., a Tokyo-based package vendor having developed a web-based groupware intended to Japanese SMEs for more than a decade, introduced their brand new SaaS edition of the groupware last November, which is called Cybozu Live[J].
This week, Mr. Yoshihisa Aono, the CEO of Cybozu Inc., unveiled the plan on how the service goes from now on, and it seems changing to a new one based on the concept of not a groupware but a business-oriented social network platform.   It has engaged more than 41,000 users since the service’s launch last November despite admission to the service is by invitation only during the period.   Finally it’s opened to everyone this week. 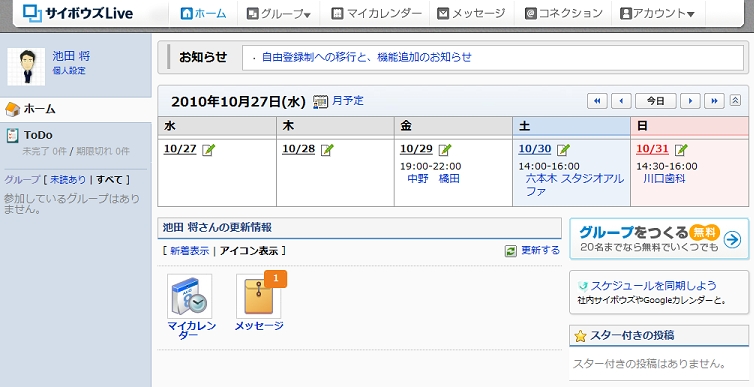 Cybozu Live has a Twitter-like micro blog feature and a public profile as Facebook has, in addition to common groupware features such as scheduler, calendar, to-do list and file-sharing. Installing a free Windows client software called Cybozu Live Sync[J] helps you synchronize your schedule stored on Cybozu Live with your Google Calendar account.
In February 2012, Cybozu plans to start charging the users of the service.   A group (a minimum unit of the users sharing various forms of information) registered on the service having more than 20 participating users will be monthly charged 100 yen (=USD1.25) a user.
Cybozu, Inc. was founded in 1997 by Toru Takasuka[J], a serial entrepreneur who had been previously working with Panasonic Electric Works (formerly known as Matsushita Electric Works).   He shut down his latest start-up Lunnar last year (refer to this Asiajin story for more details), and is serving the Japanese tech community as a mentor.
Disclaimer: Asiajin’s co-founder Akky Akimoto is working with Cybozu Labs, an R&D arm of Cybozu, Inc.

as a mentor
The following two tabs change content below.