CyWorld Japan [J], a Japanese localized version of the most successful social networking service in Korea, CyWorld, announced its withdrawal from Japan in August 2009 [J]. 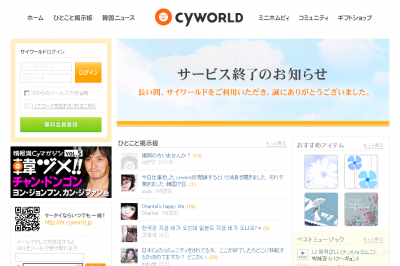 According to the announcement, the direct cause of this shut-down is the operation failure of periodical site maintenance on May 26th. It is explained that the unstable errors after the maintenance is not recoverable until the close. Honest explanation also says that the maintenance was a part of preparation for the site close, so anyway shut-down was inevitable.
Announcement also tells that you can register to the original Korean CyWorld as a foreigner. But it requires you to send a copy of passport or driver’s license to their head office in Korea. CyWorld Japan was localized to accept anonymity for Japanese net users who prefer being anonymous, whilst the original Korean one is strictly keeping real name registration.
This is a symbolic news which shows how social network is difficult to deploy into other language, even by the very successful and strong player.
The news is a kind of ominousness to other imported social networks such like MySpace Japan, Facebook, both of which are not so successful as in their originated country. Also for being exported successful Japanese social networks like Mobage-town in USA and Mixi China.