2011 was not only a year that changed the geography of Japan but also a year that drastically altered the way Japanese people use social media. Facebook came out of nowhere and increased its user base more than 200% (Socialbakers) , Twitter became mainstream  (Study 4) and a Comscore report claimed that Mixi is not #1 social network in Japan anymore… The wind is behind Facebook, Japanese culture favors Twitter and Mixi is the oldest platform and still has some potential. So will 2012 be the year of Facebook, a great comeback story for Mixi or an easy win for Twitter?
In order to answer these questions I (Adam Acar), my colleague prof. Fukui from Ryutsu University and my seminar students recently conducted 3 studies:
Study 1: A nationwide sample of 1000 online panel members aged between 18 and 65 surveyed. Data was collected during the 3rd week of March, 2012.
Study 2: Content analysis of the top 100 Japanese brands and the top 100 US brands. Data coding took place in the month of January, 2012.
Study3: Content analysis of the tweet messages of American and Japanese college students. The data was coded at the end of 2011.

What is the biggest Social Network in Japan?

There are conflicting views about the biggest network in Japan because of methodological differences (GREE has about 26 million registered users (Source: GREE), Facebook has 13.5 unique users (Source: Nielsen (2012), read the criticism of the methodology here  , Mixi has 15 million monthly users (Source: Mixi),  Twitter has about 23 million users (source: Comscore)
Although all these numbers point to a different winner, we can conclude that Twitter is #1 social media destination in Japan because, GREE’s numbers do not reflect active users, Facebook’s own database shows only 7.8 million registered users and several nationwide polls indicate that Twitter is more popular than Mixi. In study1, participants were asked to name the social network that they used most often (single choice) and the results were as follow

Another study (study 4) by Tribal Media House and Cross Media Inc. which was released at the end of February, 2012 surveyed a nationwide sample of 10715 people and asked them to list the social networks they were using (multiple choice). Here are the results

What are the current SNS trends in Japan?

First of all, Facebook not only has the highest growth rate but also the highest satisfaction rate. When the participants were asked (study 1) if their use of Mixi, Facebook and Twitter increased or decreased recently, our findings clearly indicated a positive trend for Facebook. While 54% of the sample used Mixi less frequently than the past, only 20% of Twitter and Facebook users indicated using those services less often. What is more, 27% of Facebook users actually used the service more than before, the ratio twice higher than any other platform.

So, can we say that Facebook will out-compete both Twitter and Mixi soon? Not really, at least not soon. Because, about 62% of current Japanese Facebook users are younger than 35. However they only represent about 30% of the Japanese population (who are older than 13). In other words, Facebook’s momentum will slow down unless the elderly start using it.

Secondly, Facebook and Twitter has similar churn rates. If everything goes the same, Twitter will remain as #1. As the matter of fact, although some Japanese claim that they use Facebook more often than before, this is open for interpretation. There’s a quite low “creators/spectators” ratio among Japanese Facebook users. In study 1 Facebook users were asked (who indicated Facebook as the most used social network (n=131)) to report how many times they updated their status and uploaded a photo/video in the past 2 months. the results showed that 70% of them did not upload a photo or video and 63% did not update their status in the past 60 days.

Recently there were news in the media stating that Japanese users don’t care about anonymity any more since many of them started using services like Facebook and Google+ where anonymity is not allowed. Study1 indicates that this is not true. The fact is Japanese users still care quite a lot about the real name policy and a huge majority of them (82%) are against revealing their real names in social networks. There’s certainly an improvement; however, currently it seems trivial…

This data also shows the majority of Japanese users are still reluctant to show their faces in online social networks.

How Do Japanese Companies use social media?

I and my seminar students investigated the top 100 Japanese brands and the US brands’ facebook and Twitter activities in January, 2012 (study 2). Our initial analysis has shown that fewer Japanese brands are active both on Twitter and Facebook when compared with the top US brands. We also observed that Japanese brands in general ask fewer questions, post less frequently, don’t address their fans directly, don’t initiate conversations, share less amount of information and don’t allow fans to post on their Facebook walls. The top 100 American brands investigated in this study seemed to be way more active and assertive compared to the top 100 Japanese brands.

Which platform is best for marketing?

Tribal Media House’s report (study 4) shows that Youtube (66.7%) and blogs (32.7%) have the highest penetration rates in Japan. Readers should also remember that blogs are generally more likely to be trusted, don’t have limitations like Twitter and allow anonymity.
In study 1, respondents were also asked if they participated in a social media campaign or if social media influenced their purchase decisions. Although a higher number of people reported to have participated in a Facebook campaign, apparently more people wrote about products and services on Twitter and ended up buying a new product or service after finding out about it on Twitter. So the researchers (our team) concluded that for brands trying to reach new customers in Japan, blogs or micro blogs (Twitter) is a better alternative.(Of course tis also depends on the target characteristics: e.g. Facebook might be a better choice for a campaign that targets college students who want to study abroad)

How Do Japanese Individuals use social media?

Japanese users perhaps use social media just like other nations but there were a few things that caught our attention.
1-       The biggest reason for using a social network in Japan is not to communicate with friends (maintaining social capital) but to kill time. (Study 1)
2-       Making friends (expanding social capital) is not among the top 10 reasons for using a social network platform in japan. (Study 1)

Sample size: 477 (Uses at least 1 social network, question: please indicate on a 5 point scale why you use sns. )
3-       Twitter users in Japan are actually less extraverted than Mixi and Facebook users. Interestingly Google+ users seem to be the most social ones. (Study 1)

Sample size: 477 (Uses at least 1 social network)
4         Although Japan is a collectivistic society, Twitter users tend to tweet more about themselves(Our interpretation of this finding is: it is because mentioning others might be intrusive.) TV-related tweets are way higher than the US perhaps because of the impact of TV shows & dramas on Japanese social life. ( Study 3) 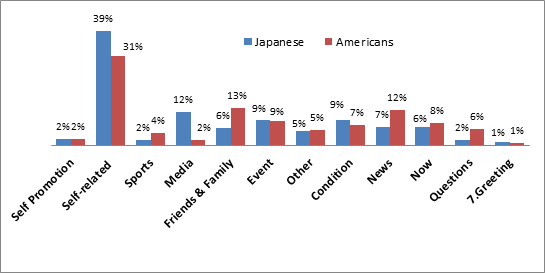 What do Japanese consumers think of location-based services?

Study 1  also showed that 91% of social media users (member of at least 1 social network) did not use any location-check service in the past 60 days. In the same line, Tribal Media House Report (study 4)  shows that Foursquare penetration rate is only a dismal .7%. Considering the fact that Foursquare has been in Japan for more than 2 years, it might be a false assumption to expect these kinds of services will pick up.
Additionally, Japan is a risk adverse society and location based services are less likely to be adopted in this country for several reasons. It is mostly because when people (especially females) publicly share their location it’s a ) risky b) seems like showing off c) invitation for invasion of privacy. A recent blog on Asiajin illustrates why Japanese people might feel very irritated when their location is discovered by a stranger. http://asiajin.com/blog/2012/03/22/experiment-can-you-identify-twitter-users-in-tokyo/

Is Google+ going to be popular in Japan?

Both study 1  and Tribal Media House’s Report (study 4) indicate that around 8% of the online population in Japan have been using Google+ (have an account) which is not bad since Goolge+ has been around for only a short time. However in an experiment where we compared the usability of Facebook and Google+ UI, we found that Google+ UI was seen a little bit more complicated than Facebook. http://emergingmedialab.wordpress.com/2011/07/20/google-interface-might-be-too-simple-for-japanese-study/
So, only time can tell whether Google+ can be mainstream in this Youtube country…