Important note: Most of these statements are qualitative in nature. For some statements there’s not enough supporting data. Please read this post with a pinch of salt.
In the summer of 2004, a new file sharing platform, named wirehog, was in the works. This platform was not that successful and it gave us a very clear lesson that pretty much noone knows what’s going to happen in the social media business including some names like mr. Zuckerberg, because he was the one who chose to launch wirehog instead of focusing on the core functions of facebook and using the time and money on a failed project.
One of the unexpected developments recently taking place is the unstoppable rise of Facebook in Japan. Like many, I predicted that Facebook can’t be the mainstream platform choice in Japan, based on two studies I conducted in our university.
What happened?
Around Mid 2011 I announced in my classes that I was looking for people who used Facebook but then quit or simply preferred Mixi instead. I was able to get about 18 people in just a few days very easily. We asked those students why they did not want to use Facebook and these were the answers we got
-Facebook is not needed in Japan, Mixi is just fine
-Facebook is not secure
-The interface is very complicated
We asked if they did not want to use the platform because of the real name (jitsumei) requirement. they said NO. Unlike some people who speculated that Facebook can’t win in Japan because of the real name issue, we found that real name requirement was not a big deal.
We asked what their opinion would be if pseudonyms are allowed or if Facebook was changed. Most of the participants said (not all but Id say more than half) that they would not use Facebook no matter what.
After those focus groups, we conducted a follow up survey and noticed that about 10% of the participants quit Facebook and about 20% used it very rarely. So I suggested that Facebook cannot take off in Japan. When I declared that it was not going to happen, I actually didn’t make my decision based on the data, I thought it would be because of Japan’s unique culture as I explained almost 2 years ago
1- Facebook means disclosing more info, more frequently and to more people but there are dozens of studies that show Japanese people feel quite uncomfortable disclosing info about themselves to strangers.
2- Facebook means exchanging links, images and messages with a large number of people but Japanese people would feel quite unconfortable with communicating with their close friends and weak connections in the same way.
Eventually Facebook took off, but I still dont think that what we said was wrong, it was the change agents that we forgot to put into the equation.
Who are change agents? According to Everett Rogers (the theory was originally developed in 1962), Change agents are those who promote a new idea or a new innovation in society. They can be opinion leaders, influential people or people who have stake in the adoption of any new phenomenon. 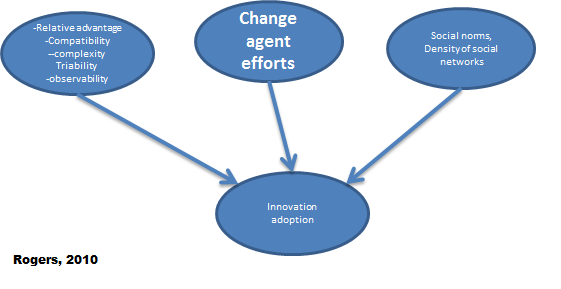 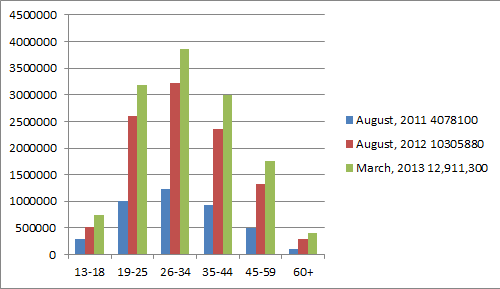 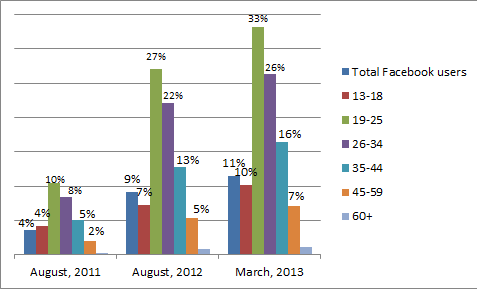 The percentages represent the number of Facebook users in each age group divided by their representation in the total population. You can see the detailed info in appendixes.
Lessons for other social networks
1- It is all about making people believe that your platform is popular and you can do this by collaborating with
-people who call themselves “social media experts” so that they can religiously promote your site and “educate” the society about your services
-college students because they are desperate to find a job and they would use your site if they believe it will help them get a job
-make marketers and companies believe that your platform is a “marketing machine”
2-The design doesn’t matter that much. Google+’s interface got great reviews from many different tech bloggers. Also whenever Facebook changes its interface the users threaten to quit but eventually people stick around because what matters is not the interface design but whether other people are using the network or not. Let me give this example: would you want to hang out at a incredibly well designed bar with no other people, or a well designed bar with some people or a crappy bar where everybody hangs out? Yes pretty much everyone chooses the same answer.
3- Competition is important. Even though Japan has been known to be an insular society, Facebook succeeded in Japan but not in Russia. Facebook may claim that people adopt its platform because of its global appeal but in reality when local competitors have all the marketing options and all the basics (photo tagging, sharing, etc) people may not switch to Facebook.
4- It is not true that Japanese people don’t care about anonymity any more and Facebook’s success cannot be tied to its real name function. LINE picked up 40+ million users way faster than did Facebook and it certainly allows pseudonyms.
5- For any platform to cross the chasm, one age group should heavily adopt the platform. For Line, this was high school students and for Facebook, it seems like it was college students.
6- Disasters and major historical events (like the Arab Spring) do not necessarily have long term effects on usage numbers. As it can be seen in this Google Insights graph Ustream picked up after the earthquake dramatically but in the long run the efect faded away.
7- As also the graph shows that Facebook’s success has nothing to do with the quake. Additionally one should also remember that most of the people in the disaster hit area did not have a Facebook account when the disaster hit.