Not a long time ago we conducted a large scale study by surveying 1000 online panel members about their social media usage habits. Although I personally have some doubts about online panels, as the members are paid professional survey takers and may not be normal people (bargain hunters, tech savvy people, early adopters, etc), the results seemed quite reasonable and were in line with the numbers that were provided by Tribal Media House (http://asiajin.com/blog/2012/04/02/a-summary-of-the-latest-studies-about-japan-social-media/)
Back then we only ran some exploratory analysis and didn’t get much into details. Tonight I saw a friend’s tweet asking about about social gamers’ social network usage and did a cross-tab which showed some mixed results. To summarize:
– I defined social gamers as “people who reported to use Gree OR Mobage “sometimes”, “everyday” or “several times a day.”
– As Table 1 shows, the next most popular network among these people is Twitter and Mixi. Not a surprise here as Twitter is the biggest network and Mixi also has many social games. Also please remember that this data was collected 7 months ago, so the Facebook numbers also should be a little higher.
– As table 2 shows, contrary to common view, these people don’t buy a lot of virtual goods. It is perhaps mostly otaku people or heavy users who spend their money to buy virtual goods or paid applications.
– As Table 3 shows, these people have some artistic interests but they are not necessarily happy people or people with high self esteem.
– I was already told by another professor that most of the core GREE and Mobage users were low income people who play games to kill time (e.g. truck drivers) and this is also reflected in the data. Social gamers have lower income levels compared with non-social gamers and the difference is statistically significant.
-The methodology is provided below 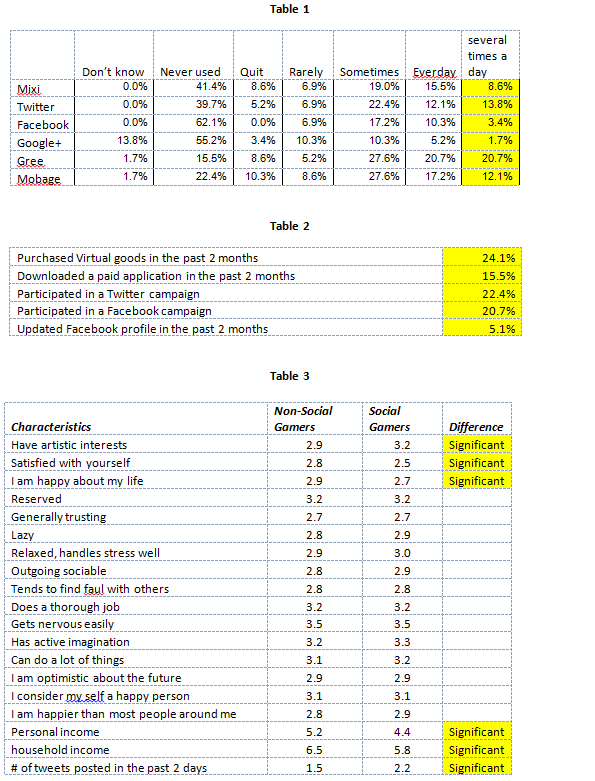 The data was collected during the 2nd week of March, 2012 with the participation of 1000 members of an online panel operated by Kansai Electric Corporation in Japan. The members of this online panel are ordinary Japanese people who get points for each survey they take and they are given a chance to take a survey only in certain periods. The panel members who agreed to participate in the study were asked to complete an online self administered survey and there was no incomplete entries. The age of the respondents varied between 19 to 65 years with the average of 42.88 (SD=9.30). All of the regions in Japan were equally represented in the sample and the participants had a wide range of occupational and educational backgrounds Although most of the respondents were male (67%) compared to most of the studies, this sample is larger and shows a higher variance in the sample characteristics.