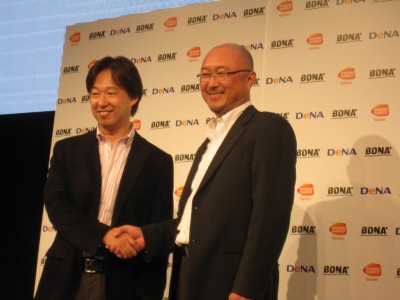 Isao Moriyasu, DeNA CEO (left), and Shin Unozawa (right) made the announcement. The name from the new company, BDNA, came from the acronyms of Bandai (BD), Namco (NA) and DeNA (DNA).
They shown the new logo as well:

Bandai Namco has the contents and the users, but they don’t have the operational know-how for monetize them as DeNA/Mobage has. DeNA’s objective is going global: they are expecting social games will reach soon the same quality as arcades and consumer games, so more and more people will use them.
Bandai Namco and DeNA collaborated before for developing Gundam Royale, a huge success with more than 3M users. Inside BDNA they plan to develop games from Macross series, Gundam series and Tamagotchi series.