Last Wednesday 25th took place the annual Mobage Open Platform Forum. A huge event, with hundreds of attendees and lots of presentations. Still, the most interesting points were related with the need of making Japanese mobile social games global.
The message from DeNA to the developers was crystal clear: go abroad and go ASAP. Localize language, but don’t mind to localize any other thing: you need to be out in 2/3 months, it’s now or never.
They are basing their assumption in the recent success of Rage of Bahamut from CyGames, which just hit the 1st place of top-grossing apps at Google Play (press release here [EN]). Seems like the KPIs of this game in America are really close to the Japanese KPIs, a shocking fact since nobody believed it was possible to replicate the Japanese ARPU abroad. As DeNA CEO Isao Moriyasu and ngmoco CEO Neil Young said, this demonstrate that the browser games can work in America, and of course that represents a huge opportunity.
So the idea is: keep the Japanese core of the game because it works. Not only Rage of Bahamut is being successful, TapFish (10th) and Ninja Royale (14th, with an ARPDAU multiplied x6 since launching) are showing there is a way to go.
Some of the advises of ngmoco CEO Neil Young to the audience:

DeNA is recommending to develop web and app hybrid games, since they are easier to update and multiplatform. In that direction, they presented PEX, a tool to convert HTML5-Javascript games to native apps improving velocity and capabilities (it will be available by the end of may); and also an update of ngCore, their tool for making native apps, remarkably improving the performance of the previous version.
For those on Big Data business, they also talked about their needs regarding managing huge amounts of information, since they have 40 million users and 2 billion data-points every day.
About the presentations of new games, the most interesting one was shipped by BNDeNA, showing a Macross game with lots of 3D action as well as social interactions with other players; actually it looks more like a console game than a mobile social game. 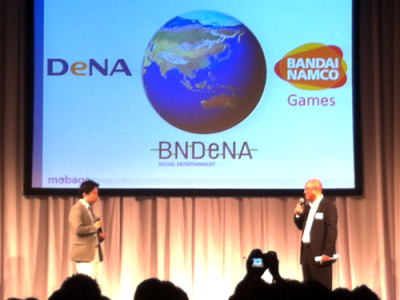 (DeNA CEO Isao Moriyasu and BNDeNA CEO Shin Unozawa, this one a little bit embarrassed about the name of his company)
Finally, the Mobage Awards 2012: Platinum Prices were given to Sengoku Collection (Konami), Rage of Bahamut (CyGames) and Idolmaster (Bandai-Namco); the Partner of the Year was Gloops (price handed out by the idol Yui Aragaki).