At the Tokyo Game Show, a variety of businesses and organizations other than game companies have displays. This comic book software “ComiPo!” [J, E] is one of them.

“ComiPo!” is released by the ComoPo! production committee, (Web Technology Com Corp., committee chairperson: Keiichi Tanaka), and it’s a program that’s like, “Even though I can’t draw a picture at all, I can make a 3D comic in a flash!” 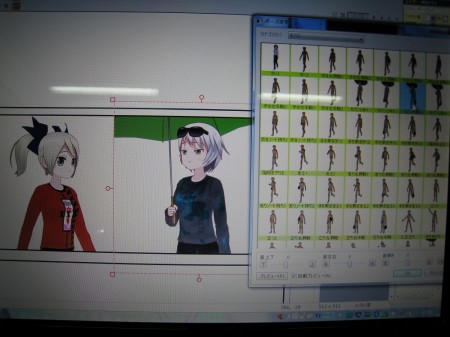 So, you can easily create a comic by combining backgrounds with various 3D data and speach bubbles inside the pre-prepared panel layout.  Because it’s 3D, you can set the character objects at any angle within 360°, and also change the pose.  You can also make them hold things like handbags and umbrellas.  Furthermore by updating the software when the time comes, new 3D data will be added.  Secondary use is possible if for non-profit / non-commercial purposes, and a for-profit version is also possible for commercial use.

Actually, examples of business-related use have recently been taking place.  Here is a publication of all of the labor laws regarding “ComiPo!” works.  The writer basically purchases a for-profit version of “ComiPo!” and it seems that manuscripts have been created and published.

What’s more, from September 15th the ComiPo! production committee is releasing an English Version of “ComiPo!” as “ComiPo! (English Version).  This will have all contents and the user interface converted into English, so 20 different frequently used “BANG” and “SHHHHSHH” English sound effect letterings from American comics can be used.  Also 102 European characters (51×2 types) are included, such as [ç ä á à â], appearing on the screen as drawn lettering fonts, so fans from non-English speaking countries should be able to get into it.  When I checked it on Twitter, directly after release many foreigners seemed to be writing tweets about it, and among them were tweets in Spanish, Portuguese, and other languages other than English.
From here on, the ComiPo! production team is thinking of producing 3D data for mascots of local governments and such offering collaboration projects using Data from ComiPo!  People of governing bodies of all countries, why don’t we activate the landscape with ComiPo!?
ComiPo! “Even though I can’t draw a picture at all, I can make a 3d manga in a flash!” [J]