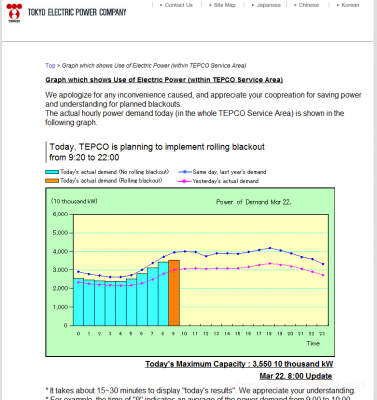 Tokyo Electric Power Company(TEPCO), which is in charge of Fukushima nuclear crisis and Kanto/Tokyo rolling blackout, opened a new page to tell how much electricity are used hourly in total.
After the scheduled power down began, there were many complains from people who got inconvenience by blackout and transportation confuse caused by blackout. It was difficult for people to keep saving power as it was not known if their efforts contributed, and how much. Though it took time for TEPCO to do that, they finally give the almost realtime (about one hour delay) data.
For example, 11:00 a.m. today 22nd, maximum capacity they can generate is 37 million kilo watt, and the real usage after 9 a.m. is approaching it, and the chart shows from 9 a.m. they started partial blackout in the assigned area.
It is already said on Twitter that not only the chart but raw data of demand/supply should be available, so yet TEPCO does not really understand fully how plain, machine-readable data helps third party developers to make more useful mash-ups, but I am optimistic.
After criticized by web users their providing blackout grouping and schedule only on PDF with long list of area names unsorted, TEPCO seems to be working on improvement. Area info now can be browsed by directory, downloadable in Excel format for reuse, schedule is visualized and mirrors are provided on several different major portals.