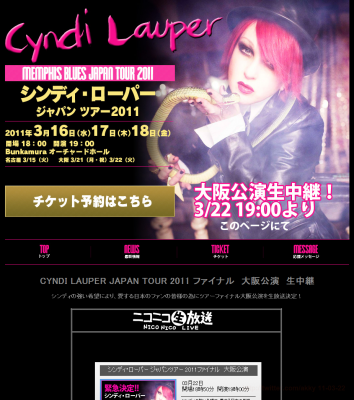 Cyndi Lauper, a big name American pop singer, who has been touring Japan since March 15th for concerts in Nagoya, Tokyo and Osaka, is giving suffered Japan a big online present – live concert [J].
Backed by a Japanese movie sharing service Nico Nico Douga, tonight’s her final concert in Japan will be aired from NHK Osaka Hall on Nico Nico Namahousou [J] (Namahousou = live stream) from 19:00. It is for free, whilst the concert tickets cost 9,500-11,500 yen(US$117-142).
[Update] You may watch the live on the tour official site without Nico Nico account. The number of watchers already passed 30,000 after the first few songs.
You will be able to enter the live at 18:50 from the event page on Nico Nico Namahousou [J]. From cellphone, you need to visit http://m.nicovideo.jp/ and go to “Nico Nama Mobile” corner. In iPhone case, Nico Nico Namahousou Appli [J] is needed.
And if you do not have Nico Nico Douga’s account, here is our article on registration and usage.

“By Cyndi’s strong will, we decided to broadcast the ‘Cyndy Lauper Memphis Blues Japan Tour 2011 Osaka Final’ for Japanese people whom she loves!”
The message on the tour site

Under the situation many people fled from Tohoku, Tokyo and even from Japan, Cyndi Lauper, who just arrived Japan after the quake on the same day, decided to run the tour including three days in unsettled Tokyo. When even most Japanese artists canceled their concerts around the nation [J]. She called fundraise for the quake victims at venue by herself.
[Update 22:30] The concert was watched by over 120,000 people at peak. 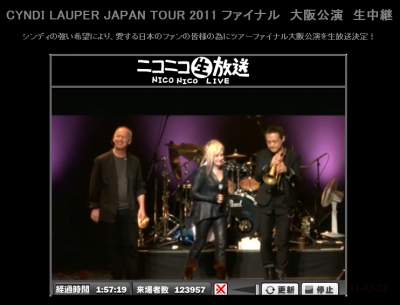 It was good number as the live stream was just announced few hours before that.

Cyndi Lauper Hopes To Help Japan Through Her Music | PerezHilton.com