Here’s a follow-up to my previous posts covering the grassroots movements to relieve the devastated areas.
GPS-Enabled Map of Scheduled Blackouts: 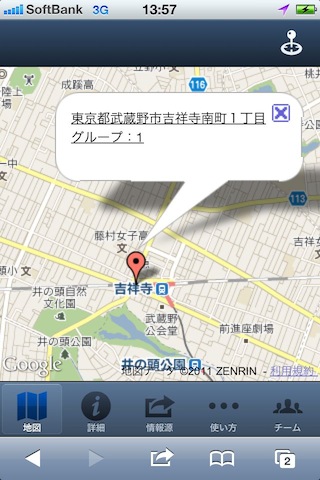 A team of web app developers Boss Yooann, Kabaken, Kazuhiro Kotsutsumi and Yuki Naotori has released this Google Map mash-up.  Without entering your address, it helps you find which hour of the day your area will lose power.  Available on PC, the Android and the iPhone.

A poster appealing for refraining from hoarding goods [PDF] 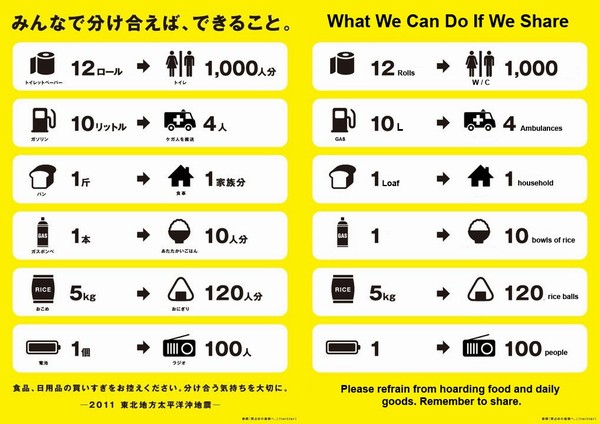 In Tokyo, households are suffering from shortages of daily supplies because they buy too much to prepare for possible aftershocks and multiple disasters.   Tokyo-based ad designer Takamasa Matsumoto[J] introduced this poster to encourage people to refrain from hoarding goods.   Supermarkets and shopping arcades in the city appreciate his effort and print his poster to put on walls.

A team of nearly 30 web app developers has developed this website called Todoke.  Currently individual donations of goods are not accepted by any local governments due to extra sorting and distribution costs and thus limited to collective, large-scale delivery by public organizations and companies.   The website lists companies that would like to have supports from and their products. You can purchase one of such goods near you.  The team will gather your purchase records and deliver them to the company as a sign of collective request.

A system engineer in Tokyo[J] has developed these web apps, which shows you statistics of what relief goods are in need in each part of the stricken regions.
Roomdonor.jp[J]

A team of Keio University SFC students Itsuki Sakitsu and Kohei Fukuzaki has developed this Twitter-integrated website for match-making those who can provide temporary homes with the victims who have lost their homes in the disaster.
Meanwhile, roommate finder sites such as Roommate Cafe[J] and Roomshare Japan[J] are also appealing their users for giving free rent houses for the victims. (Thank Akky and Serkan for the info)

Don’t be sad, Japan (日本不悲傷): A rooter’s song from the Chinese Websphere

The Internet community in Mainland China has composed this song and uploaded it on Youku, the Chinese version of YouTube.  It causes a high sensation.