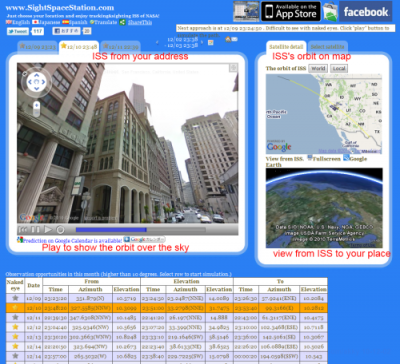 SightSpaceStation by Tokyo-based Tori Ningen [J] is a site gives you full experience and knowledge on the International Space Station(ISS) watch.
The English/Japanese/Spanish-trilingual web site tells you that the earliest date and time when you will be able to watch the ISS flies over your town next time. Google Maps, Google Street View and Google Earth (requires plugin install) show how ISS can be seen from you, how ISS will see your town, country and continent.
The Smartphone version, available both on iOS and Android, Augmented Reality technology used to show the ISS orbit over the image you see.
See an English demo,

They says that the smartphone version already has 6,000 users worldwide.