From Left to right: Moderator Motohiko Tokuriki (Agile Media Network), Yoshikazu Tanaka (Gree), Akinori Harada (Mixi) and Hiroki Eda (DG Incubation)
Moderator Tokuriki (M): Let me start with Eda-san, you know overseas well, what is the most different between Japanese market and the world?
Eda (E): The biggest one is language.   But I think Japanese users tend to dive in novel web services compared to the rest of the world.  When we look at the characteristic of web service users in the world, Japanese users are mostly categorized in the early adaptors.
M: Gree and Mixi have overseas services.  Do they have any difference from your domestic service?
Harada (H): We have an operation in Mainland China.  But I’ve been in charge of it for the last two months.   Mobile handset specs, line speed – these are different from Japan.   Flat-rate data subscriptions also required to spread out the service, but China does not have it.   That’s why Internet Messenger services are still popular.
E: Twitter got a sensation in Japan despite there was no Japanese edition.
M: Wondering if Japanese are too much conscious about national borders.  For example, Gremz[J], a blog widget service that allows you to virtually grow a sprout by your blog postings, got a popularity among Taiwanese users as unforeseen.   If the service is highly evaluated, it may break the language barriers.
E: When we deploy the service in our market, “mobile-enabled” is an essential option, that is totally different from the rest of the world.   I mean feature phones.
Tanaka (T): PCs are still usual for using web services in the overseas.  But transition from PCs to mobile were so rapid in this country, that’s why we can’t see how the world trend will become from now.  Mobile culture is well-matured in this country, but its technology is neither.
M: How about the difference of the start-up environment?
E: Conditions are different for each case.  Aiming at Japanese market or the world?  That’s it.
T: The world market has ten times potentiality.  But so is the number of your rivals if you go to the world.   I think unless the service may succeed even in Japanese market, that can’t make it in the international market, neither.
H: There’s a time gap when we look at the difference.  US-based start-ups are usually launched in the West Coast, moved to the East Coast, and then go to non-English countries.  It is very important to foresee that process when launching.
M: If there’s no flat-rate subscription in Japanese mobile services, we all find out we’ve run up a fortune by web access mobile, which is “Pake-Shi (packet death)”.
H: We should keep our eyes on the trends which are different country by country.   The iPhone is now so popular in Japan, and we can’t bring Flash-based services from other countries.
M: Had we better aim at succeeding in Japanese market?  Otherwise, should we aim at a specific region that a service suit for?
T: If your service has proved a success here, there’s another country where you can make it.
M: Can we work in Japan with aiming at other countries?
E: We have an incubation program called Open Network Lab[J] that encourages potential entrepreneurs to develop international services.   If the service has a sound business model, that can be launched anywhere in the world.
H: I think going abroad without testing at the domestic market tends to fail.   There’s no case that Silicon Valley-based company chooses Japan as their first market.   Neither is it for us.   We live here, we know the core values of our mobile community.   That’s why we’d better start with our country, then go abroad.
T: If you plan to launch an extraordinary service, you don’t need to do it in Japan.  I think you’d better succeed something in Japan and then leverage it outside the country.
M: Japanese start-ups are criticized for not seeing foreign markets.  But you just need to launch a business in Japan, first.
H: We should aim at foreign markets from the first stage.
T: In order to manage a big operation by a number of persons, we should do it in Japan, first.  I’m not confident to manage such a number of employees in English.
M: Tanaka-san, you’re encouraging your employees to learn English, aren’t you?
T: Not so much.  I’ve been often asked if we develop a new service targeting elderly people which has two million population in the next.   But we will develop what everyone can use and enjoy.   Regardless of nationality or religion, that’s our first priority.   Japanese market is not so huge that we can’t focus on a specific segment as a target of our service.
M: Tanaka-san, you were previously working with Rakuten. If you had been working there, how would you feel about that?
T: They have a bunch of servers.   They have a number of engineering guys to maintain them.  I became keenly aware of that.  They have 20 million users.   When they think of services targeting 700 million users in the world, they need more workforce for maintaining servers.
M: Here now we have the second topic.   We need a bunch of cost for adding servers and facilities when users increase rapidly.   But you need a long time to get to the monetization period.   How can we make a living between two timings?   It’s very short in the case of Japanese start-ups. 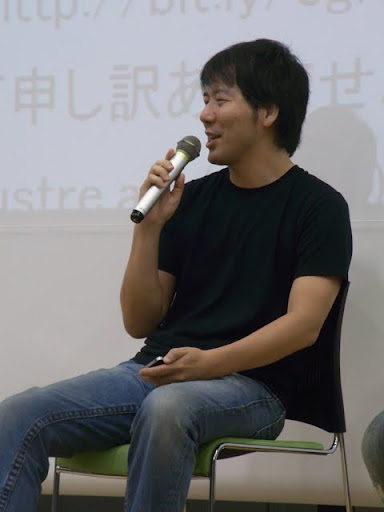 T: I’ve been unable to mention this, but I’d been throwing cash advance money to server purchase for my own service (before founding his company Gree).  For covering it by my bonus payment to come.   Then I enjoyed it.   I used to be an office worker who has built a virtual town of 70,000 citizens…   But when I first saw Evernote, Dropbox and LinkedIn, we can’t launch such services requiring a long-term period to make results in this country.
M: I remember Mixi has been showing a loss, there was a conference where users came together to talk about the issue (for preventing it from being terminated).
H: Yep, then I was working with NTT DoCoMo, and in charge of lending them a room for that.  I remember.
M: The user growth rate of Twitter, Mixi and Gree are all quadratic.  How could you make it grown at such a pace?
H: If you have a  sufficient number of users, investors will definitely come.   But we should depend on not only Japanese VC firms.  Mixi used to be in the red.  Then we added non-free membership and ads.   Yet we may not  have established a sound business model.  A rocket start allows no money period.   But the service requiring a long-range view needs a sufficient amount of money.
M: Some people are running their services individually.  Tanaka-san could corporate it, but most people have no idea on how they can make it.
E: When we look at the people participating in Open Network Lab, mostly they’ve developed prototypes.   Some people say, “We have not used money but engaged 150 core users.  That’s why we’re ready (for corporating and fundraising).”   They’re very confident. They’re going to fundraise in a very steady way.
T: When I founded my company, I was claimed it’s like killing myself.  That was the time when Mixi overtook us, then I just quit my previous company (Rakuten) to launch a company.
M: In Japan, there are a number of services being maintained by individual developers as part of their hobbies.  The services may be easily terminated when the developers get busy for their main jobs.   They have no way to handle it for stepping forward.
E: I used to be running Gree alone.  Mixi had 30 employees at that time.   If I had said I would stop that, I would be terminated (by users). I just founded the company to avoid it. 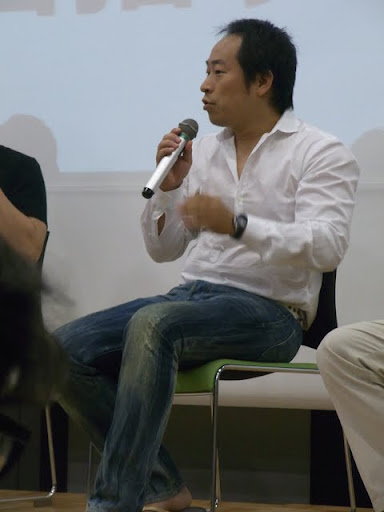 H: We’re forced to make up our minds to found a company in these days.  It used to be much easier 50 or 60 years ago.   My grandfather retired from the police and launched his business. (Civil servants don’t like to quit their jobs because of income stability.)  In the US, those who can earn above-average salaries at sound companies launch their own business.  I think they think of founding a start-up as a sort of game in the country.  But most of those killing themselves in Japan are owners of medium-sized companies.  Less Japanese companies have bankrupted than those of the US.   We need an environment where people who can work with top-ranked companies are motivated to launch their business.
H: It may be stemmed from the issues of fundraising.   Tanaka-san and my boss Kasahara (Mixi’s CEO) need to invest in start-ups more aggressively.  Both guys don’t use money enough. (big laugh by audience)   In Japan, there’s an atomosphere in which only some famous people can launch their business.   We just have to change our society and build an entrepreneurial ecosystem.  Tanaka’s cash-advance story (for server purchase) is a typical example of bad cases.
E: I wonder if we can have a system to bring start-ups the money from those who have made success in their business.
M: How can entrepreneurs protect themselves from bankruptcy?
T: We can get finance from the US now.   No worries.   Don’t worry about it, just do your business, that’s what I can say.
H: In Japan, if we’ve not made your mind for launching a business, we keep being an office worker and never launch it.  We need to remove the difficulties in launching a start-up.
M: Bill Gates quit the university and started his business.   That means, in a way, we need start it during our school days.  It’s not a good answer for attendees who are mostly office workers.  Could we have any good advice? 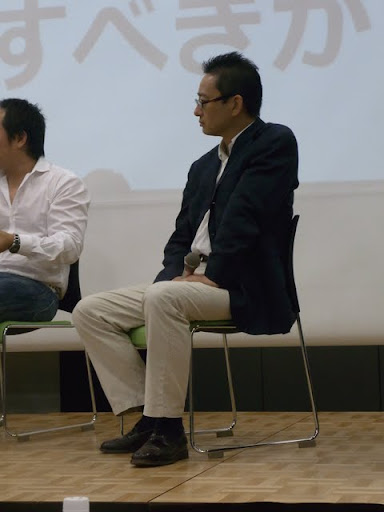 E: At Open Network Lab, we’ve been aiming at bringing feedback from successful entrepreneurs to potential entrepreneurs.  That can shorten the time to learn experiences for business (including how to avoid failures and recover from it).  Then it makes results in a shorter time.
H: There are two options, found a company first, develop a product in the next.  Otherwise, develop a product first, and found a company in the next.  I think Japanese tend to take the latter option.   I recommend entrepreneurs to fundraise without thinking it so seriously.   This is the right time.   Then they should start with Asia as well as Ameba Pico (refer to this Akky’s story).
T: If you can’t dominate Asia with the service, you can’t do so in the world, neither.
M: Thank you so much.
(Applause by audience)
See Also:

Live Event: WISH2009 Is Just Ahead