Wherever you go in Japan, vending machines are serving drinks and beverages at every corner of the country.   We’re experiencing the hottest summer for the first time in a long time, which devotes to almost 50% increase in beverage sales at vending machines compared to their average sales revenue.
A subsidiary of a public transport company and dealing with beverage retail business for train passengers, JR East Water Business[J] developed the next-generation vending machine and placed it at Shinagawa station, a Tokyo’s gateway for the Shinkansen bullet train. 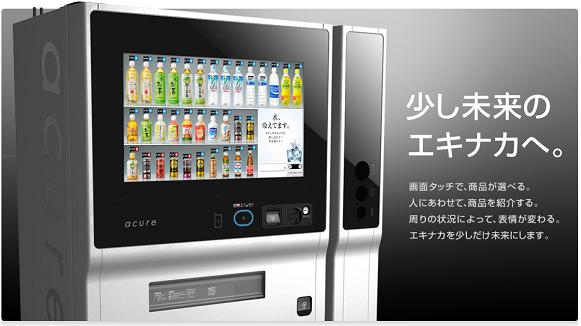 This new machine has a large-screen touch panel display and a WiMax connectivity to a digital signage network.   While no one is stopping by at the machine, promotion slides are rolling on the display.  When you get close enough, it detects your gender and age by capturing your appearance with an overhead camera, and it presents you a recommended variety of beverages that you may like.   The machine shows you a different set of beverages depending on season, hours of the day, and where it is placed.   You may pay for it by cellphone-wallet or contactless IC card Suica[J].   The items which have been sold out will never be appeared on the display.
The company expects to place the machines at 500 in-station locations in the Tokyo Metropolitan Area within two years.