Bluem[J], the Tokyo-based tech start-up which have been founded by the person who worked formerly with Japan’s second largest ad agency, expects to launch a Groupon-like daily deal service for cinemas next Monday, which is called Drepass[J].
First of all, a cinema puts a special programming notice on their website and broadcasts it on Twitter.   When a pre-defined number of coupons for the programming have been reserved, the coupons will be on sale and the programming will be settled.   In addition, you are allowed to throw requests by tweeting[J] the titles you wish to watch at cinemas.
The company partnered with Tokyo’s large-sized cinema complex Wald 9[J] in Shinjuku, and it will publish 100 proposals about old movie showings, discount showings and roadshows of movies-in-series. 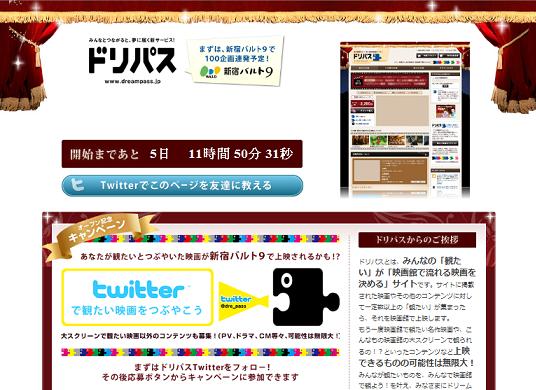