According to ITMedia [J], Internet Watch [J], Asahi [J] and more coming, 11 songs of Perfume‘s album “Game” are found to be sold on iTunes store, which turned out to be unauthorized copy by unknown fake company. 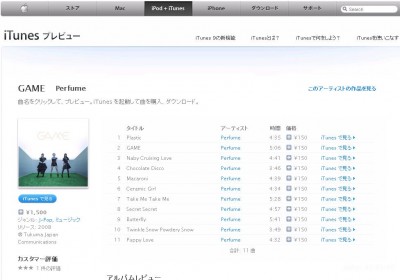 Perfume is a popular Japanese girls techno unit broke through as a star from the internet, by blogs and huge number of unauthorized mash-up movie on NicoNico Douga.
As the label Tokuma Japan Communications did not sell other Perfume songs on iTunes for years though despite many fans’ request, some fans have been talking why only those 11 songs (11 out of 12 songs on the “Game”) are sold there.
The label of the seller on the iTunes Store was misspelled as “Tukuma Japan” instead of “Tokuma Japan”.
Tokuma Japan announced that they never uploaded any Perfume songs on iTunes, and the next day (yesterday) they have been removed form iTunes store. Apple Japan PR said that they are investigating.
In this case, Perfume is well known on web and the misspell might made detection easier. But could it have been found if this was done with minor songs by unpopular artists more carefully?
By knowing forging a dummy company to sell pirated music on iTunes, concerns of music labels and copyright holders may grow in Japan. Apple Japan’s explanation is being waited.

A Perfume fan’s site in English