Since 2000, IPA, a Japanese governmental arm in charge of promoting IT industry, has been running an annual contest to find young computer engineers who have developed services and technologies that we’ve never experienced, which is titled the Exploratory IT human resources project a.k.a. MITOH. 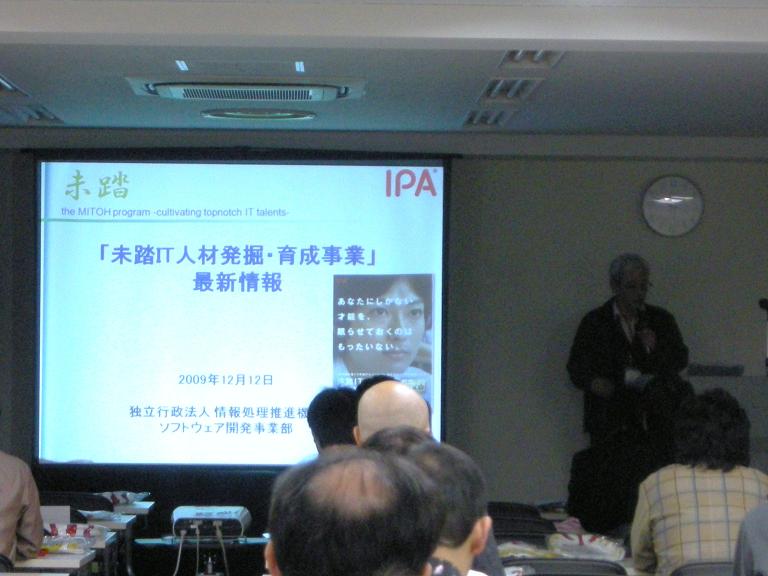 There was an year-end alumni meet-up where the entrepreneurs who had ever won the award of the contest came together and presented their aftermaths and business growth results. The ever award winners are called ESPer with maximum respect after the Exploratory Software Project, and also called as genius programmers for short.
Presenters:
Toshimitsu Dan[J], Lawyer – presents basic legal knowledge set for software engineers who wish to protect their rights. He’s well-known as the chief attorney for the defendant of the Winny Case. (Refer to these Asiajin articles for more about the case.)

Dominique Chen, Co-founder & Director, Dividual Inc.[J] – presents his service “Rigureto[J]“, allowing users to express their depression feelings and to share them with other users on the web. (Mr. Chen is a member of the director board of Creative Commons Japan[J])

Taisei Tanaka, CEO, Geisha Tokyo Entertainment(GTE)[J] – proposes future life plans for the ESPers based on what he experienced after the award-winning. His product is described in this Asiajin article.

Minoru Sakurai, CEO, Fillot[J] – presents IznaStor[J] and the story of its development process. IznaStor is a high-reliable storage system using the distributed technologies that have been originally developed for cutting-edge supercomputer and grid computing. Intended for high-traffic and rich media distribution on the Internet.

Mr. Nagai, FUCO[J] – introduces an image search service[J] to find what you want to buy from Japan’s largest e-commerce service Rakuten without any key input. Mr. Nagai’s service is off-deck and has no formal business partnership with Rakuten. The service scrapes images of merchandised clothes from Rakuten and shows you them in the order of image similarity. It assists cloth lovers to shop their favorite items more easily on fashion e-commerce services.