On Friday, at Mobile Yakan Daigaku[J], a serial after-hours study session and meet-up event for the mobile industry people, a tech incubator’s director Mr. Ryo Umezawa[J] presented a wrap-up of the tour titled “JIMS on the Plane” that he and mobile entrepreneurs had organized and visited tech start-ups in Silicon Valley for information and opinion exchange.
The idea of the tour accidentally came up at a tequila party where they often drink together, and interestingly someone of the group attended the tour starting with the day just after finishing his sweet wedding party, and he left his bride home behind for San Francisco. (No idea on what’s happening on his new-married life thereafter.) 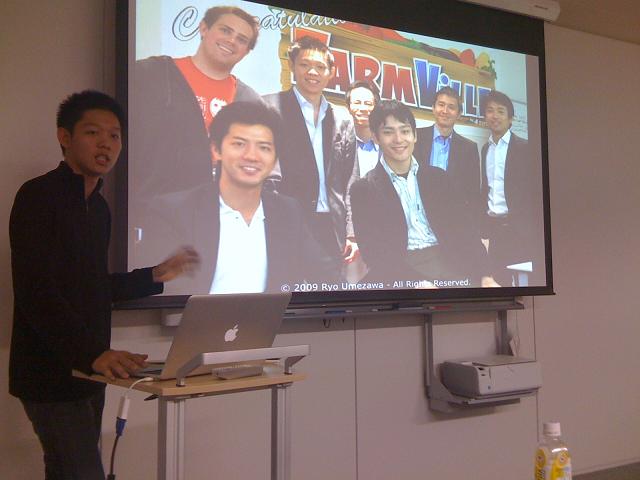 Mr. Umezawa with the snapshot that the tour participants posed at Zynga who developed popular Facebook app FarmVille. (click to enlarge)
The group of the tour visited more than 20 sites including the following Silicon Valley-based tech start-ups and venture campital firms:

I heard the company’s CEO Steve Jobs, who’s also known as a pro-Japanese meal, invited a Japanese chef to an in-office cafeteria at their Cupertino Campus to serve Soba (buckwheat noodles). Someone of the group tried it, but he complained it didn’t taste good.

In a clear contrast to the service spread state among Japanese Internet users, they said the company’s most remarkable products in the U.S. were Google Latitude and Google SMS.

On the contrary that Google Map and Google StreetView use satellite images and vehicle on-board cameras and try to show us exterior landscape images of all spots around the world, Micello is focusing on showing you exact layout and interior images of shopping complexes and business buildings with their automatic location-detection technology. But Mr. Umezawa said they had refused to disclose anything on how it works.

Zynga is the social app developer who has developed one of the best-known Facebook game app FarmVille using the Harvest Mechanic method that encourages users to visit the site many times a day to take care of the harvest they grow in the game. They pointed out the most important thing is, in terms of running a social app business in good performance, to complete an app as rapidly as possible after the ideas come up. For developing more successful social game apps, good ideas or concepts that someone else has developed should be copied without hesitation, they said. In order to improve the social apps and to develop more good apps, they said user access analysis is also important, too. As well as Google Analytics is being used for general website access analysis, there’s a statistic tool exclusively intended for analyzing Facebook app user access, which is called Kontagent.

They said American celebrities having their Facebook communities can earn USD1,000 – 5,000 every time they broadcast something on Ustream.

Plug & Play is a Sunnyvale-based incubation facility serving many start-up companies. When the tour visited the facility, Plug & Play had one of the periodical business presentation events for entrepreneurs and investors. Mr. Umezawa got an opportunity to present what the group is and what it expects in the tour on behalf of the entire group.

In order to learn how the young generation use mobile devices in this area, the tour visited also Stanford which is located in the heart of Silicon Valley. Unfortunately the university was in the middle of the exam period, the tour group had few chance to ask students at the campus, however most of cellphone holders found there use iPhone because the university provides them with the iPhone app specifically designed for the students, which is called iStanford.

Mr. Umezawa said he was so surprised that every start-up company had some fridges in the office, and they were usually filled with frozen foods and beverages for the employees. You can fill your tummy without going out of the office nor wasting time, which make it possible to concentrate on work when needed.
Mr. Oshita believed that job hunting for Silicon Valleyers is considered as something like treasure hunting.

A tech guy that the tour group grabbed a pint with was fired 21 hours before they met, but he already got a new job as rapidly as two hours before the time. That was an amazing case that will never happen in any city other than the area.

Mr. Matsumoto thought Japanese mobile industry travels forward ten years ahead of that in the U.S.

We should take the advantage of our accumulated know-hows to develop new money-making services and to grow our business further to the world-class, even if we were forced to change drastically our business model caused by the possible change of the mobile development platform which might happen someday in the future.

Mr. Tanaka just came back from his business trip in Beijing and joined the segment for Q&A-ing with an audience. With his perspective watching mobile industries in Japan, U.S. and Mainland China, he thought Japan’s 10-year ahead advantage in the mobile business is so valuable for us. Now three countries are standing on the same line to start competing. Japan is basically strong in mobile, so is U.S. for smartphone business, and China has a great population to consume what we produce. He wrapped-up the event with his expectation that we should run our business in accordance with the characteristics of the market in every country.

So far, no one can tell a country’s mobile industry is superior to another.

The tour participants answering audience questions with the snapshot of Zynga’s in-office cafeteria serving meals to employees. (click to enlarge)
From left to right in the panorama picture above:

Jeff Char (President & Founder, J-Seed Ventures) attended the tour program but was absent from this presentation event due to another assignment.
See Also: