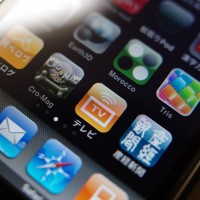 A blog iPhone Fan pointed out [J] that the everyone’s favourite BCN Ranking loses iPhone from its top 10 this week.

Top 10 of the most sold cellphone during the week from Nov. 16th to 22nd includes 4 Sharp, 3 Fujitsu and 4 others by vendor, 8 Docomo and 2 KDDI au by carrier.
iPhone 3GS(32GB) is ranked at 11th, 3G(8GB) 17th and 3GS(16GB) 20th.
The same iPhone Fan also wrote about the rumor that Softbank will make iPhone 3GS(16GB) free(0 yen) this week. They have been running free iPhone 3G(8G) campaign extended twice for 9 months now.
As I wrote when iPhone got the No.1 in Japan, single week ranking does not mean much. There may be some model transition happening in Softbank Mobile and iPhone sales was throttled, or in short supply. Because of 0-yen campaign, more regular people purchased iPhone in Japan. I have more chances to see people using iPhone on train than before.
[Update 2009-12-01] As of above, Softbank Mobile announced [J] that they would provide iPhone 3GS(16GB) for free as a part of “iPhone for everyone” campaign from Dec 4th. It requires 2 years contract and some other conditions.