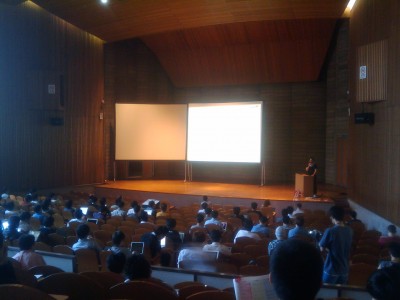 In 2008, LL(Lightweight Languages, which mean scripting languages for web development such like Perl/PHP/Python/Ruby), Ruby, PHP, Perl events were held monthly pace from early summer to autumn, but this year, three of them are set in 3 weeks consecutively. But still, motivated geeks buy and attend any of, for some all of those events and all three conference tickets are sold out.
Perl, which might sound old name in some other countries, still is the one of the coolest programming languages in Japan. Many top-notch Japanese geeks stays with Perl instead of moving PHP/Python or Japan made Ruby.
I myself am not a Perl user but always enjoy attending YAPC::Asia. Although my understanding to Perl is pretty poor, they seem to utilize Perl language’s flexibility greatly and there are no reason to look down someone by his/her using Perl in Japan (more likely s/he is an expert).
Inevitably, Japan’s Perl conference seems to be more important relatively in the world (if compare with other languages). YAPC::Asia has 3 session tracks this year and one of them are in English, which makes YAPC::Asia more international with more foreign speakers and attendees.
Many web services holding No.1 in each categories mainly use Perl, like the biggest social network Mixi, the biggest mobile social network Mobage-Town(DeNA), the biggest social bookmarks Hatena Bookmark (they also allied with Nintendo for their Nintendo DS community service), etc.
Unfortunately, unlike last year, live streaming is not provided on YAPC::Asia this year, but you may follow attendees’ reports and tweets by the official hashtag ‘yapcasia2009’.