Billy’s Bootcamp, Core Rhythms and Figurerobics by Korean aerobics guru Jung Da Yeon(정다연) – Japanese midnight infomercial programs tempted TV shoppers to buy a variety of items to remodel their body shapes.  These items will be used in several days after the purchase, but usually they will be stored in a shed and will be never used again.   What’s wrong?   How can we motivate ourselves to continue exercising?     The main reason why we quit is we have no way to share our efforts with the people having the same issue and the same target. 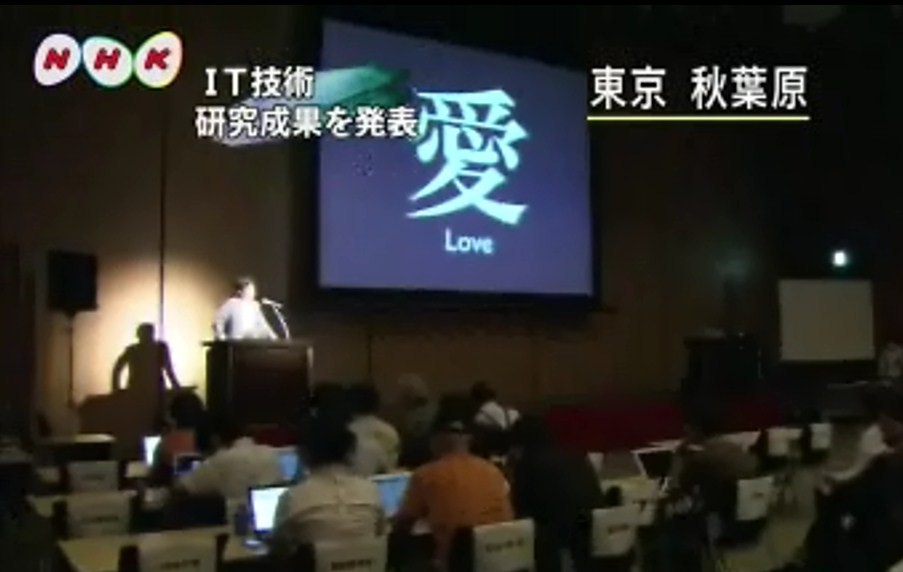 Picture: NHK’s newsclip covering the 3rd Edition of the World(Tenkaichi) Computer Cowboy Championship
There was an annual software developer conference called Tenkaichi Computer Cowboy Championship[J] in late August in Akihabara, which was the third edition and held by Tokyo-based iPhone app developer Ubiquitous Entertainment‘s CEO Ryo Shimizu[J], legendary PC magazine editor Satoshi Endo and former CEO of Microsoft Japan Sam Furukawa[J].   Mr. Yasuhiro Takeda[J](@chabasilah), studying at the Graduate School of Science and Engineering, Chuo University as well as working with web service developing start-up Glucose[J], won the semi-final prize in the championship’s student developer category with the gadget he invented, which allows you to tweet the result of your dumbbell exercise and to share it with your friends and colleagues very easily.
Satoshi Endo visited Mr. Takeda’s office in an on-site report segment of a weekly IT news TV show[J], and asked Mr. Takeda to explain how his intelligent dumbbell works.

The dumbbell is named Musculus, a body remodeling support module, Mr. Takeda says.   A wireless communication device and an accelerometer are embed on the dumbbell, and it counts how many times you extend your arms back and fourth and transmits those parameters to a server which is designed for collecting data.   The server will post a message including the speed and the frequency of your undergoing exercise to Twitter, as well as comparing your exercise result with those of others using the same model dumbbell.
If it does work well and succeed sufficiently for sharing the user’s exercise experiences on Twitter, we won’t need any other weight loss program and diet supplements.