If 1,400 letters-limit macro-blog Woofer is an American answer to Twitter, 14 letters nano-blog Chuitter is from Japan, where Haiku and other short, tiny thingy are loved. 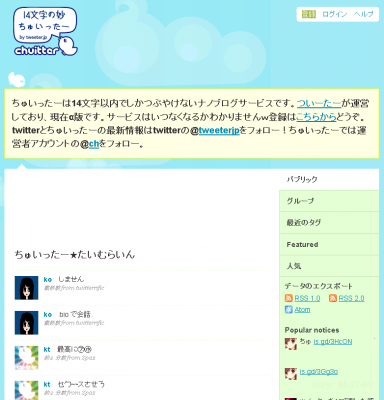 I don’t know how much serious this service is (Chuitter design seems too similar to the original Twitter), but their first day of launch seems successful. Many Japanese Twitter users are trying this clone.
In reality, 140 letters limit of Twitter is much longer in Japanese when comparing with English. As some of you may know, one letter in Kanji (China originated letter) itself has meanings so the amount of information “per letter” can be more. Even with 14 letters, it is possible to express something in Japanese.
A popular Japanese blogger Chika Watanabe showed the English/Japanese difference on tweets by using real tweets [J] last month. In the article, an example tweet by Tim O’Reilly,

which is 122 letters, can be translated if in Japanese like this,

which is 59 letters.
Probably there are some languages which is more difficult to write in short than English (German?), and I guess Chinese could be more descriptive than Japanese in the same number of letters.
# [Update 2009-10-12] Famous Taiwanese Hacker Audrey Tang explained how Chinese tweets can convey a lot of information in compare with English. Quite interesting.
If Twitter was designed 10 years ago, it was not counted by number of letters but by number of bytes, then 140 bytes for Japanese may fall into around 40-50 letters.
[Update 2011-02-24] Chutter.jp seemed to cease in September 2010.