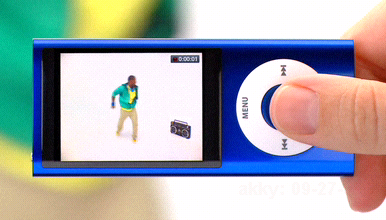 This week in Kobe, 30 years old male was arrested [J] by taking unsolicited movie of high school girls upskirt in bookstore. He set it in his shoes, under the shoelace and tongue. The new iPod nano, when it was released on September 10th, many people pointed out (on bbs like 2ch.net) that it is also usable for perverts to take unsolicited photos on crowded train.
In Japan, cellphone with embedded camera (i.e. 99% of cellphones) must make shutter sound when you take photo by industrial self-regulation. Even iPhone, which had denied to have any other Japan specific features like one-seg TV (later Softbank made external TV module), IC wallet and others, had to modify it that users cannot turn off the shutter noise.
However, movie function, by its nature, does not make sound once it becomes recording mode, and new iPod nano is not cellphone, much smaller. So 2-channellers did a lot of brainstorming how to utilize it for “non-designed” way. Embedding in your shoe was also talked on last week, according to J-Cast. [J]