Japan’s biggest social network service Mixi [J, registration required], who had started in-service microblog Mixi Echo since last summer, renamed it with Mixi Voice and made it as an “official” service. 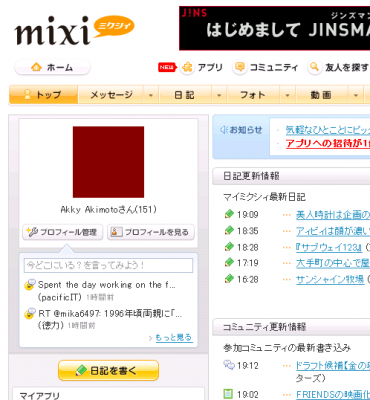 “More” link takes you to the Voice page, which looks more familiar with Twitter users. 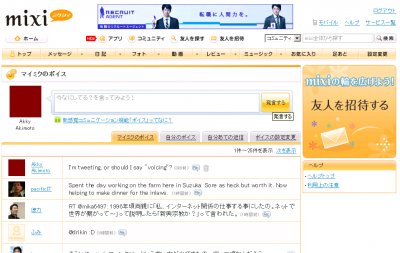 Mixi can promote the Voice to its 17 million users and seems to do so at now, but as Mixi Music stopped recently, that does not always guarantee their success.
Mixi having slick mobile sites highly customized to three major carrier cellphones with full emoji(Japanese emoticon letters) is a great advantage if younger generation are interested in microblog. (Mixi has an age limit, over 15 y.o., but still.)
However, most of heavy PC web users and some celebrities and national brands are already using Twitter, even though the total number of Twitter users in Japanese is not much. I notice many of “voices” on my timeline are just the same friends’ tweets imported from Twitter. I don’t think I switch to Mixi Voice soon but many Mixi users may know microblogging by seeing Mixi Voice.
So the race will be a popularity contest between tech-savvy people and regular people. The similar turn-over happened 4-5 years ago when the everyone’s friend Mixi passed over the heavy users’ Gree quickly and became the No.1 social network (Gree came back later by finding mobile gaming supported by KDDI/au, but that is another story).
Twitter Japan finally decided to make Japanese cellphone version client and that is planned to launch this autumn. I don’t know if the new mobile site supports emoji, and how much that will be Japanese cellphone friendly, but if that delays or fails, Japanese microblogging can be split into two different worlds between PC and mobile, old and young, web standards and closed cellphones.