Amazon Japan v.s. Japan’s local Rakuten battle was recently well covered on TechCrunch (by our buddy Serkan Toto, of course). Amazon is doing pretty good localization on their main part, books, but draining duel against Rakuten in many shopping categories.
Amazon Japan’s shipping fee 300 yen (3.3 USD) has been waived if a customer purchases more than 1,500 yen (about 16 USD), which may requires 2-3 books as good amount of printed books in Japan are in “bunko” (handy books smaller than paperbacks) and “manga”, both of whom prices are about $4 to $10.
Amazon Japan’s sales occupies measurable amount in book sales in Japan, so sometimes publishers set the price of the books raised a bit over 1,500 yen, to expect customers purchase it without bothering to add another book for free shipping.
As resale price of books are maintained by law in Japan, no book stores can discount the books themselves. So shipping fee (and point system, which gives few-percent points for future purchase) tends to be differentiation method.
The one sparked the war was Rakuten, who started free shipping campaign on February 2nd for a month initially, extended the term couple of times until November 4th. 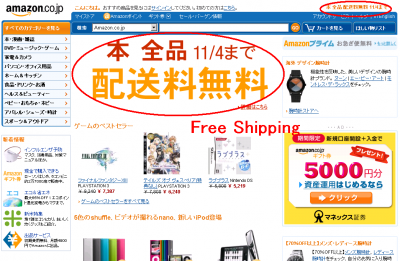 What Amazon Japan announced and started on September 11th is, free shipping campaign until the exact same day, November 4th.

This may sound old-fashioned when e-book reader Kindle is getting attention in US, Amazon Japan also announced that more chain convenience store now sell Amazon Gift Cards from September 14th. In addition to Lawson(the second biggest by number of shops), Family Mart (No. 3), Circle-K/Sankus(No. 4), it is now sold at Daily Yamazaki(No. 5), Mini-stop(No. 6) and Seiko Mart(unknown). Total number of all those stores is 27,000.