On Thursday, Sharp introduced a brand new pocket-sized netPC terminal named “NetWalker[J]“, which is expected to go on sale in late September for USD460 each (estimated street price).   It has ten hour battery lifetime, Freescale Semiconductor‘s multimedia application processor as a CPU,  a 512MB memory and a 4GB flash memory.  The terminal’s 409 gram (14.4oz) light body is very easy to be kept in the breast pocket of your jacket, and you need just wait three seconds to wake it up from the sleep mode.  Sharp expects it to be used for blogging, e-mail check-up and document make-up outside office or home. 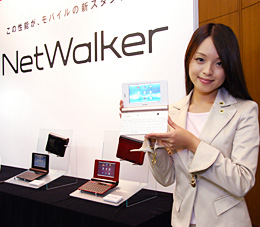 A touch-enabled screen LCD of the terminal is so small as five inches, however it has a full keyboard and an optical point allowing you to scroll and enlarge the screen by finger scratches.   Microsoft Office, FireFox and Thunderbird are installed as defaults, and e-book and e-dictionary app are planning to be added as the options.   The terminal runs on Linux/Ubuntu 9.09 (ARM edition smartbook remix, Sharp customized edition), and has a WiFi network interface.