Mixi [J] (Asiajin articles), the biggest social network service in Japan, starts their OpenSocial compliant application platform Mixi Appli officially opened to every Mixi user on PC. Mixi Appli Mobile is planned to follow next month.
Mixi announced its OpenSocial platform last year and has been running closed beta test with third party developers for months.
From the first day, over 130 applications are published by individuals and companies including Rockyou Asia, who must already know well how to succeed on OpenSocial platform by huge success on Facebook App, Walt-Disney Japan, Konami, Sony, Nike Japan, Nikon, Japan Tobacco, Honda, Yahoo! Japan, Recruit, etc.
During the closed beta, they provided another domain for developers, and it was unknown how much Mixi pushes applications to regular users in the official release.
The following is the new top page screenshot provided by Mixi PR, 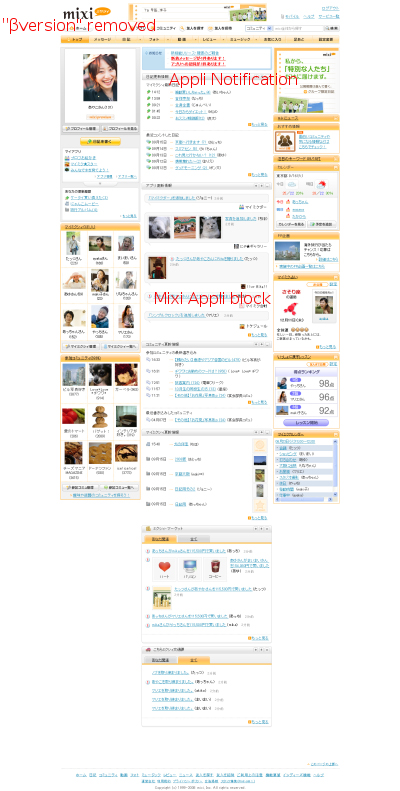 On it, Mixi Appli update box is located just after the My-Mixi(friends)’ diary box, followed by community updates box and My-Mixi photo/book/music/etc. updates box. At the bottom of the centre column, user-enabling Mixi Appli-s are displayed.
Each box can be moved up and down by user, and on my own account, Mixi Appli notification box is placed after other three, diary, community and activity update boxes. I think I did not customize any, so this 4th position is the current Mixi Appli’s default position (don’t tell me to take another account for check, because another account registration requires me to purchase another cellphone), which I think not so greatly promoted, but understandable as most of Mixi users are not tech-oriented so it is still unknown if many of them will jump on this Application bandwagon.
The other symbolic change is that Mixi removes “Beta Version” label from its logo, which they did not take away even when they IPO-ed so thought as a symbolic “perpetual beta“. Although it is not on their release, some media report that Mixi states they are not beta any more and got advanced to the next level with this Mixi Appli launch.