In the morning of July 22nd (Wed), 2009, we witness this century’s most perfect solar eclipse in the regions of Central Asia, South East Asia, Japan and Micronesia. The eclipse can be observed from 9:30am to 0:30pm. J.S.T.(Japan Standard Time), which is 0:30am to 3:30am U.T.C.(Universal Time Coordinated) on the same day. Several companies and institutions are planning livestream broadcast of this great astronomical phenomenon.
For experiencing this total eclipse moment in Japan, we need to be in one of remote islands near Okinawa, which is located on the lower latitudes of the northern hemisphere. It’s not so easy for most of us. You must agree that livestreaming is a good idea.

These Japanese national scientific bodies will use a high speed Internet communication satellite, which was launched last year, and be broadcast high-definition(HD) live image from Iwo-jima island. The live broadcasting will be projected on large screens at the national observatory and several science museums nationwide. 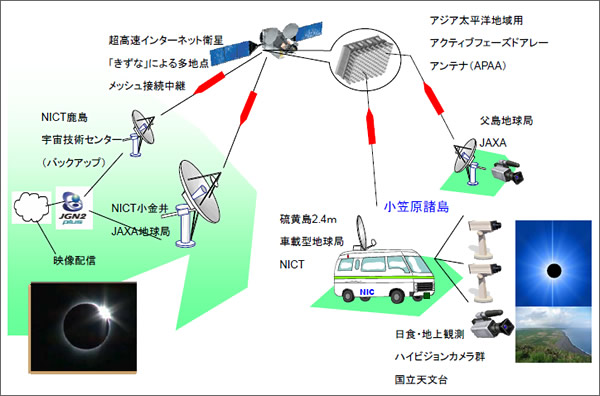 No fiber optic is installed in remote islands as to carry large volume of HDTV images, that’s why they use satellite as an alternative option.

The company sends a broadcast van to its branch in Amami-oshima island, and HD live images taken there will be projected on digital signage screens at storefronts of 100 branches nationwide. The event expects to have a reputation from store customers accompanied by their children who will have just got into summer vacation.

Live Eclipse[J], a group of geeks tracking solar and lunar eclipse (seems like an idea seen on a popular Hollywood movie “Twister”)

For Live Eclipse people, this will be their 15th livestream experience. The group will send broadcast staff members to Shanghai’s suburb of Jiaxing City[C] (Mainland China), Nakanoshima Observatory[J] in Tokara Islands (Japan), Amami-oshima (Japan) and Marakei Atoll (Micronesian Island of Kiribati), and will bring you live video images from these four locations on the Internet.

There will be a public viewing event using the livestream and its collaborated entertainment show at Hiyoshi Campus, Keio University, Yokohama. Visit the event organizer’s website[J] for more details.

Disclosure: This story’s author, Masaru IKEDA served as a technical advisor for the first edition of Live Eclipse event[J] especially in designing the systems to transmit live images from observation spots in remote areas of Mongolian desert and Siberian forest.

Two companies will bring live images from Ogasawa Haha-jima, Bonin Islands, to NicoNico subscribers’ cellphone handsets and PC screens. Two weather girls will anchor the live show[J] and investigate the supervisions whether dogs are howling and frogs are cloaking in chorus when the sun and the moon are in conjunction. 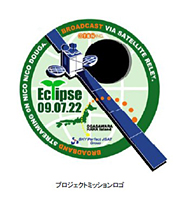 All Internet users around the globe can be a part of such a historic event without flying over to Asia-Pacific. We Asiajin will cover Internet and blogosphere related developments which may happen on the eclipse day.