Takafumi Horie, aka Horiemon, who founded livedoor, one of the Japanese major web companies, who was arrested by securities fraud in 2006, began twitter and quickly getting thousands of followers in hours today. 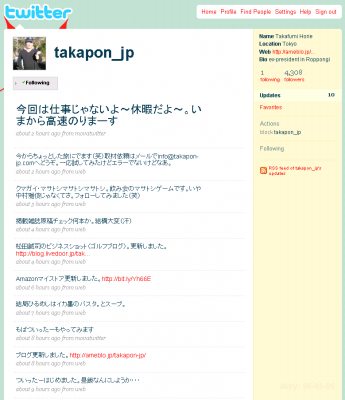 His first post [J] was “I started twitter. I’m thinking what to eat for lunch”. Later he reported he had eaten squid ink pasta and soup.
After his original popular CEO blog on livedoor was shut down after the incident, he left the livedoor board but still keeps 17.25% stocks. He started another blog [J] in August 2008 on Ameblo [J], which is operated by CyberAgent which CEO is his close ally Susumu Fujita [J].
After 10 tweets and 4,382 followers at this point, he only follows only one, another successful web entrepreneur friend Masatoshi Kumagai [J], CEO of GMO Internet [J].
As Japanese twitter has not growing as fast as English one, and unlike English, celebrities are already active on (regular) blogs and have not come into twitter world much, 4,000 followers in hours is pretty fast. That shows many web users are highly interested in Horie’s words, thoughts and activities.