People say two key reasons why they subscribe to daily newspaper are for checking up TV program’s time table and free standing inserts provided by local supermarkets. The inserts are very important items especially for housewives who have to manage the family budgets. On Friday, it became possible for them to check up the latest edition of the inserts only with their WiFi mobile devices such as Nintendo DS and iPhone at railway station platforms absolutely free. Now you don’t have to subscribe to any newspaper, and you can compare local supermarket prices at the station on your way back home.
Shufoo![J] (named after Shufu, meaning housewives in Japanese), Toppan Printing‘s web-based service which collects free standing inserts distributed by 16,000 household retailers in every town of Japan, scans them and publishes them on the web, teamed up with Japan’s nationwide public WiFi service[J] operator NTT-BP[J] (NTT Broadband Platform).
Basically, Shufoo! allows you to find the latest copies of the inserts provided by supermarkets located near your home by entering your ZIP code. NTT-BP has installed WiFi access points at 1,100 public locations including Tokyo Metro subway stations, private railways’ stations in major cities, Tully’s coffee shop chain[J] and KFC shops[J] nationwide.
When you login the WiFi service, your location will be automatically detected by the parameters associated with access point you use. With your WiFi-enabled device, you’ll be allowed to check up scanned standing inserts of supermakets nearby as well as e-free paper, fortune telling, local weather forcast and the guide to restaurants nearby.
As I mentioned in this story, switching Japanese terrestrial TV system to digital broadcast may cause removing the reason why people subscribe to daily newspaper. Now it is possible for housewives to get the supermarket inserts for free and in an easier way. The second reason for the subscription has been removed as well. 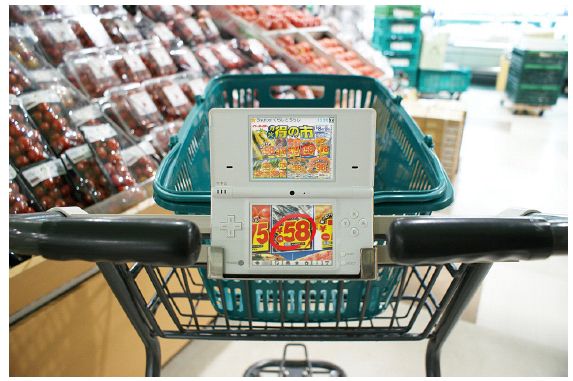