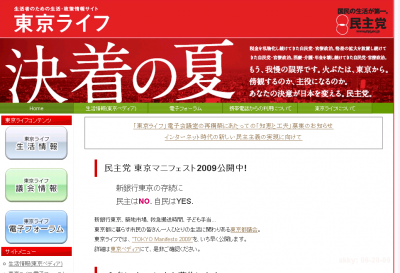 Tokyo Life has two main sub-sites. One is “Tokyopedia” which is a wiki about topics around Tokyo metropolitan assembly and local administrative information. The tool used for the Wiki part is MediaWiki. It is said that the wiki editors are young representatives belong
For example, one short page says that DPJ is against Tsukiji Fishmarket movement, which Liberal Democratic Party supports.
The other sub-site is “Electric Forum”, which is a social network with open registration. After the launch on 12th, it has been not even displayed for many visitors because of access overload, now the social network part is turned down and it is asking feedback by e-mail for temporarily.
On the top of the “Electric Forum”, they protest against Japan’s public offices election act, which prohibits internet usage during the campaign. That means if Obama were in Japan he would be arrested by violation by using blog, YouTube and twitter.
This “Tokyo Life” seems to be prepared for Tokyo Metropolitan Assembly Election which will start on 3rd of July. After the starting day the site is supposed to be frozen, no update to avoid the violation of the law. Updates before or after the election term has no limitation.
Expecting the election of the national house of representatives soon, this “Election and the Internet topic” is again heated up on the web, though traditional media stays rather distant.
Fumi Yamazaki has written up a great article around this issue.