Japan’s second largest telecommunication company, KDDI introduced today an “augmented reality” cellphone app[J] allowing transillumination of the objects you shoot with a camera embedded on the phone. This new app is now available at the experimental lab menu[J] of the company’s website. 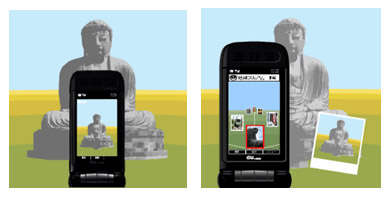 With a GPS feature and a built-in 6-axis force sensor, the app will detect where your phone is located and which direction it faces toward. Then the app shows you a picture associated with location and direction parameters obtained, which was previously shot by another person. A sequence of these processes makes you feel as though see the object through a wall in front of you.
In order to introduce interesting user experiences using this technology, the company intends to launch a photo sharing service called “Earth Album”, and participating users will be allowed to share pictures to be used for the app’s transiluminated images of the objects as though they were.