At a flagship shop of Softbank Mobile, Japanese reseller of iPhone, there are people began lining up for tomorrow morning, new iPhone 3GS. 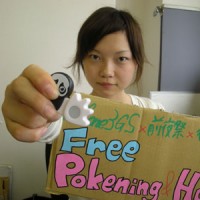 Ketsudan Potaufe, a web unit sends a live reporter girl to there and let her broadcast live report from there on ustream.

The livestream quickly got an attention from Japanese net users. At 8 p.m. (Japan Standard Time, JST), over 1500 viewers was recorded. Searching @PTFLive tag on twitter shows people’s chatting on her programme.
It seems that they use a note PC Let’s Note with 3G mobile connection service e-mobile.
[Update 1 a.m. (JST)]
There is an overnight iPhone event running in the building for waiting purchasers. But this girl @ksorano seems to be unabled to get power supply from official, Softbank Mobile and chose to broadcast in front of the Softbank Omotesando shop. The viewers is now 1574.

Now it shows iPhone app contest but the number of viewers is 346.