For refraining from shooting objects put inside private premises over the walls located along public roads, Google Japan announced on Wednesday it would deploy new measures not as to violate resident’s privacy after considering Japan’s local characteristics including its housing styles, tightly crammed rows of houses and high population density.
The new measures are:

For those who are willing to show viewers inside premises in more clear images for promotional use to have more tourists and visitors, Google Japan will start a new program and accept the application for requesting capturing more clear images by using a bicycle having an on-board camera instead of a vehicle, allowing to get into narrow streets and spaces. 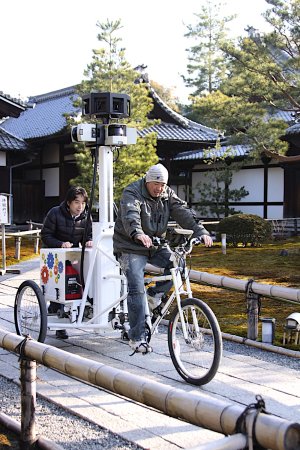 A trike having an on-board camera captures images for Google StreetView.
(Photo courtesy by: Google Japan)
The new program is available for free of charge, however, not officially announced when it will start.   Google Japan expects the program’s possible applicants to be zoo, park, university, open-air market, stadium, racing circuit etc., and the company shows you inside images of Kodaiji Temple[J] in Kyoto and Asahiyama Zoo in Hokkaido, as the new program examples.

The chief priest at Kodaiji Temple was interviewed about the temple’s participating in Google’s new program.
via CNET Japan[J],  IT Media [J] and At Mark IT[J]
See Also: