A Tokyo-based conglomerate of PC manufacturing and e-commerce retailing, MCJ(Mouse Computer Japan) announced it would shut down the company’s avatar SNS service Cafesta[J] at the end of this month. The service earns 600,000 unique users and 80 million pageviews in a month. 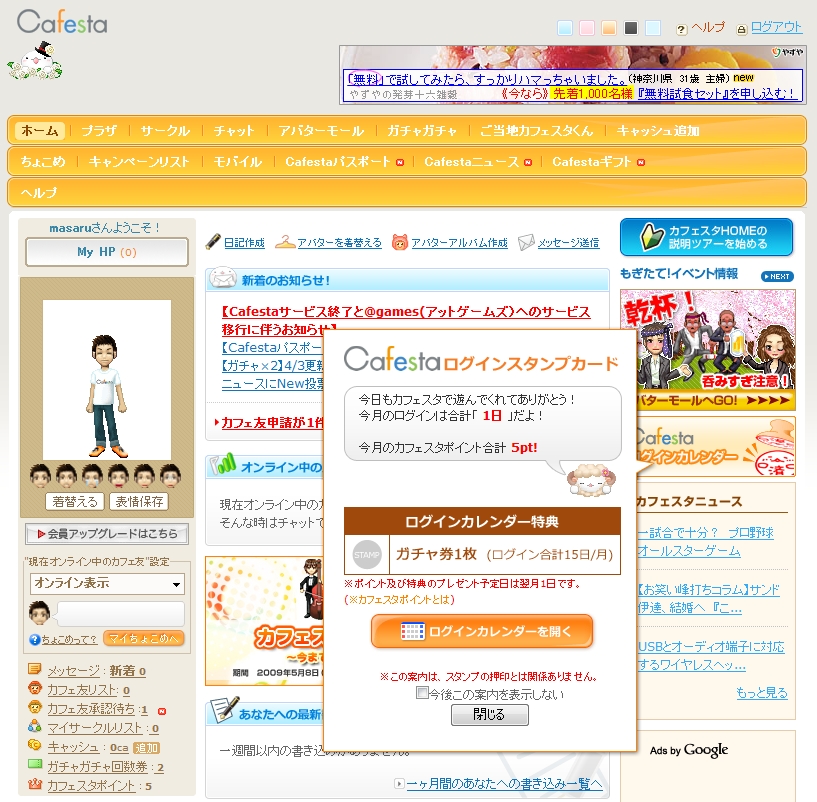 Cafesta was launched by Powered.com (merged to KDDI in 2006), an ISP and a subsidiary of Tokyo Electric Power in 2002. Then its ownership was handed over to a joint venture of Powered.com and Korea’s Daum Communications, and last April MCJ purchased the service for obtaining possible users who are likely to use WiMax service that the company intended to start.
But after purchasing the service, MCJ learned it engaged no possible WiMax user but had middle-aged female users who are willing to post their luncheon images everyday.
As for this time’s closing, MCJ arranged a campaign program allowing all Cafesta users to switch their memberships to @games[J] which is an avatar-based online game service provided by GCrest, a subsidiary of CyberAgent and SystemPro, and it requires no additional subscription fee.
MCJ used to be requesting each of the users to have a paid subscription or to buy an avatar to earn revenue enough to cover the maintenance cost. However the company has been suffering from decline in its principal business of PC retail sales, and it decided to leave the service that would not contribute to the principal business. MCJ’s president Kaoru Uesawa said, ad revenue based web business seemed like a white elephant from the Internet bubble economy.
In similar cases, the illustration SNS Pixiv[J] temporarily interrupted new user sign-up for the lack of infrastructure capability to meet the user’s emerging access needs, which made Pixiv users worried if the service continues thereafter. Some of Nico Nico Douga[J] users call themselves for switching their membership states from free to paid subscription in order to get the service owner out from the red ink. Mixi[J] users also had a meet-up to talk about how to bring more profit to the service’s provider.
Does it mean ad revenue based social site business breaks up? Should the business model be proposed not by the service provider’s employees but by the service users?
Via IT Media News [J]
See Also:
Notice: Cafesta plans to shut down its service and encourage the users to switch their memberships to @games. [J]