In association with the meteorology company eTen[J], the Tokyo-based broadband TV portal operator Actvila[J] plans to launch weather-linked TV ad showing to the operator’s service subscribers in this coming April.
When signing up with the portal service, you will be requested to enter your zip code, which allows the operator to learn where you live.   The intended advertiser has to prepare some patterns of its TV ad clips for a variety of weather conditions.   In combination of the geographical data you entered and the weather forecast provided by eTen, you can watch the customized pattern of commercial breaks, which are fully in response to the weather condition in your region.
Cosmetic and beverage sectors are highly expected to bring their weather-linked ads, because their sales perfomances are definitely reflected by the weather condition.
Actvila was co-founded by several consumer electronics giants to promote the enhanced use of their digital TV sets, and most of brand new models support the operator’s portal service.   With an ISP subscription and fiber-optic connectivity, you may enjoy watching on-demand movies and time-shift programs for free or by PPV (pay per view).
Actvila contains “TV” in the middle of its name, and that sound means “open the door” in Japanese.
eTen is a subsidiary of Japan’s only satellite TV platform operator, and known for being broadcast its weather TV programming nationwide 24/7.
In similar case (or not similar), in summer we usually watch TV commercial messages brought by Tokyo Electric Company (TEPCO) every morning, which advises us to cut power consumption by announcing the estimated number of the region’s electric demand.    Its main purposes are to avoid possible power outage caused by the higher electric demand than the capacities that power plants can cover, and also for CO2 reduction to follow the Kyoto Protocol.   I don’t know whether the commercial message can contribute to the purposes, but I ‘m so impressed with its realtime response.   Every morning in summer days, the company calculates the expected demand based on the latest local weather parameters and scheduled events, and the number is announced in the commercial breaks on some of the TV morning shows.
As you may see, weather-linked advertising is highly connected to the movements of nature, and it may contribute to reducing the people’s waste of consuming more stuffs than they require. 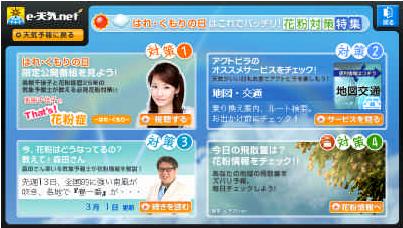 (This example of Actvila’s weather-related contents is appeared on screen only in sunny days, when many people suffer from cedar pollen allergy.   The weather persons introduce countermeasures against the symptom.)