The three major Japanese newspaper companies in the Nikkei–Asahi–Yomiuri Internet Business Partnership introduced their free iPhone/iPod app on Wednesday, enabling news stories from these papers to be read side by side.   The partnership was formed almost a year ago to launch a website bringing news stories from the three different papers together in one place. The resulting site was given the name “Allatanys [J]” (pronounced as ‘a-ra-ta-ni-su’, not as ‘all-at-anys’), which means “to make something new”, and which ends with “anys”, the first three letters being the companies’ initials.
The newly-introduced application allows you to read cover stories, city news items, editorials and pictures carried by the newspapers.   It is very interesting to be able to compare the three papers in terms of their media policies and political stances right in the palm of your hand. 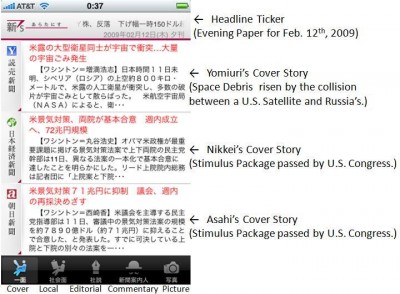 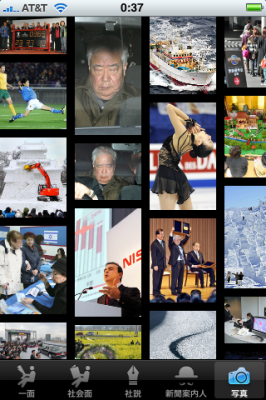 Some newspapers are reportedly facing bankruptcy in the United States, which is causing major Japanese newspapers to come up with ways to combat the rapid decrease in the number of their subscribers over the last  few years.   The iPhone/iPod app is not currently monetized, but the group expects it to motivate consumers to also read the actual physical papers.
On a related note, The Sankei Shimbun [J] has already introduced their own App Store offering, developed by Tokyo-based tech venture Yappa, which won the Israel Trade Award in 2004.   Asiajin author Serkan Toto wrote about Yappa in this story on TechCrunch.
I’ve listened to the perspectives of a few people who think that newspapers in Japan might die as a medium by 2011.   The conversion of TV signals to digital in Japan (known as DTV in the United States), is scheduled to be completed by that year as well.   A survey has stated that the second most frequently read part of a newspaper is the section on local TV programming. In fact, this section is ranked the number one reason for Japanese consumers to subscribe to newspapers.   DTV has an electronic programming guide feature built in (EPG for short), so you don’t need the paper anymore.   This may further accelerate subscription cancellations as the change-over date approaches.
(Proofread by: Sean O’Hagan)