Currently number 4 on the (Japanese) App Store’s list of Top Free apps is Katana Japanese Sword by Hanatsuki Inc.[J]. A bit further down on the Top Paid list at number 28 is KATANA by Appliya Inc. Katana Japanese Sword is currently free (although the company’s website states that this could change at any time), while KATANA costs $1.99 (until February 28th, when it jumps back up to $2.99).
Both applications are very simple and involve swinging your iPhone (or iPod Touch) through the air in various slashing motions thereby maiming or killing imaginary enemies. Graphics are almost non-existent, as it’s quite difficult to look at your screen while ducking and swinging, isn’t it. Background audio accompanies both applications and of course, there are some nice sound effects of sword hitting sword, and flesh. To be honest, the apps are quite pointless, but I was surprised at how much I enjoyed the action. They really gave me a good work-out.
Of the two apps, I much preferred the free Katana Japanese Sword (opens in iTunes). It has a lower average rating in the App Store, but this seems to be because some reviewers were unimpressed with the developers’ English level. One complained about the spelling of sword (the app’s main page spells it “sord”) and another commented on the app’s English description, each giving the app a rating of one star. The majority of reviewers however, awarded the app 4 or 5 stars.
Katana Japanese Sword (KJS) starts with some really nice traditional Japanese music and gives the user the option of a Japanese or English interface. The instructions are clear and simple. 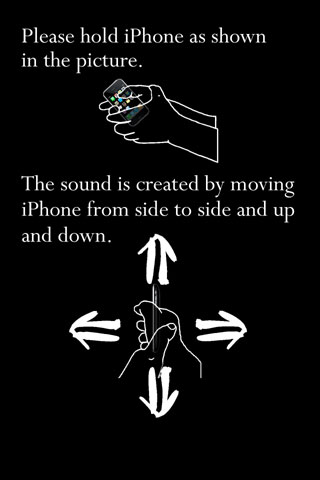 When you hit “Play!”, you are taken to the app’s main screen, which displays a long katana and two options: “BGM” (background music) and “Quit”. KJS has four looping BGM options, as well as a silent mode (until you start slicing that is). I thought two of the BGM options were a bit corny, but the other two really set the mood. There are quite a variety of sound effects, including swords clashing, slashing, the yells of your opponents, and the sound as they hit the ground. With each swing of your iPhone sword, some virtual blood spatters on its screen and then fades away. Once you’re worn out from all the fighting, press “Quit” to see your results. Here are mine: 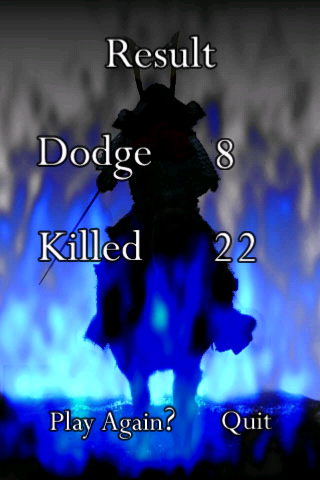 I’m unsure if I dodged 8 opponents or if 8 opponents dodged me. But, it’s quite clear that I “killed” 22.
KATANA (opens in iTunes) begins with the following warning (see image below) which is quickly sliced away to reveal your katana in its scabbard. (Only a short portion of the katana is viewable during gameplay.) The app has a few different backgrounds which change randomly each time you play the game. 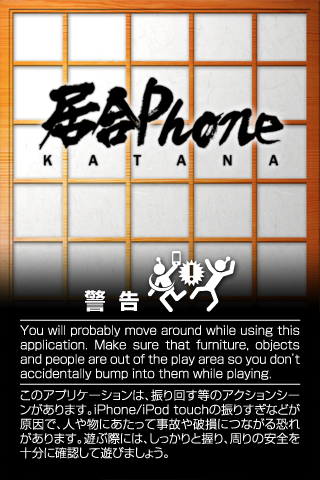 The main screen displays sound and info options. There is only one rather short BGM option and it sounded a bit too peaceful for such a violent application. To begin “fighting”, move your finger upward to draw your sword, and start swinging. KATANA’s sound effects were quite limited and not as realistic as those in KJS. Once you return the katana to its scabbard, only then do you hear all of your opponents fall loudly to the ground. There is no blood in this katana app, so it’s slightly more kid-safe than the other. You can watch one of Appliya’s promotional videos for KATANA here.
As mentioned above, I think the free app is a much better option. The music is better, the sound effects are better, and the cost is better. Unfortunately, KATANA loses this sword fight.
(Warning: My iPhone almost flew out of my hands during testing. Perhaps I let my samurai spirit get the best of me. You have been forewarned.)