Last Friday, Japan’s first social-lending service provider Maneo Inc. was invited to Digicon Salon’s monthly technology meet-up, where company CEO Tadatoshi Seno-o gave a presentation on Maneo’s services and background at the Graduate School of the Digital Hollywood University in Akihabara, Tokyo.
Mr. Seno-o formerly worked for one of Japan’s major banks, and he co-founded the company in 2007 jointly with the Tokyo-based incubator J-Seed Ventures as an alternative to banks and consumer finance companies, which are the most common options for average Japanese consumers to borrow money.   He and his colleagues took more than a year to design the service’s architecture. Being the first of its kind, it also took more than a year to get approval from the Financial Services Agency, after a number of difficult negotiations with agency officials. 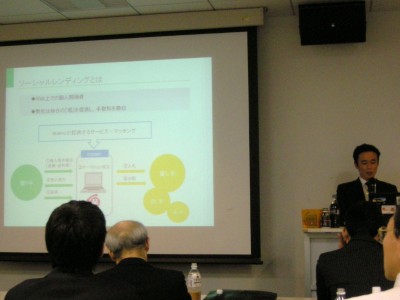 He not only introduced Maneo, but also summarized social-lending services and trends around the world.   UK-based social-lending site Zopa announced last year that it would set up a local subsidiary in Tokyo and start its service for Japanese consumers by the end of 2008, but the service hasn’t materialized yet.   U.S. social-lending leader Prosper founded SBI Prosper, a joint venture with financial services group SBI Holdings in Tokyo.   SBI Prosper seems to be preparing for an upcoming service launch but the global economic downturn could cause a delay, Seno-o said.
Basically, social lending connects borrowers with lenders through an auction-like process in which lenders willing to provide the lowest interest rate “wins” the borrower’s loan.    As a distinctive element of Maneo’s service, the borrower has to propose his/her purpose as well as the interest rate and amount to the lenders, which requires a certain skill for the borrower to persuade possible lenders.
Mr. Seno-o quoted some interesting examples of Q&As between lenders and borrowers on Maneo’s website.
A woman running a nail salon near Shibuya Station submitted a proposal to borrow 1.5 million yen (approx. USD 16,000) to renovate her salon.   Her business was going well, however her loan requests were not approved by banks or governmental financial institutions because the salon was less than a year old, and she didn’t have a statement of accounts which is essential for a credibility assessment.   By emphasizing that her employees and nail estheticians were highly-skilled, she was able to impress enough lenders on Maneo’s site, and was successful in obtaining the money.
Another example was a story of a man who had fallen in love with a Chinese girl.   He met her at a BBQ restaurant, and dated her for a couple of years.   However, she was forced to return to mainland China because her student visa expired.   He frequently visited her in China, and believed that the best option was for the two of them to get married to avoid living apart.   He wanted to borrow money to cover their wedding expenses.    He also succeeded in obtaining money from lenders who decided to support their love and future.
(Author’s note: It is difficult for a Chinese national to get a Permanent Residents Visa to live in Japan without any business expertise or not being married to a Japanese partner.)
Other examples showed that Maneo could also accommodate the financial needs of car sales between friends.   You can purchase new or second-hand cars at auto dealers relatively easily with many choices of auto loans provided by various loan brokers.   But that option is not available when purchasing a car from a friend.   If you take a consumer loan instead, the annual interest rate would be around 20%, which is five to ten times higher than the rate for loans provided by average loan brokers.   Maneo allows you to get your money with a one-digit percentage rate to meet such needs.
A much larger audience than usual was in attendance, and the lecture room was almost filled to capacity with office workers from various industries.  Some people pointed out that Maneo’s idea is an online form of traditional ways of lending and borrowing money in a real-world community, called “Tanomoshi-ko” and “Mujin”, which were common in the Kamakura Period.
Maneo has raised funds from several venture capital groups including Yasuda Enterprise Development [J], I-Sigma Capital [J] (Marubeni’s VC), Neostella Capital [J] and GMO Venture Partners [J].
Digicon Salon is a monthly study group for people interested in digital technologies and cutting edge Internet trends.   It was started in 1996  in Compaq’s showroom in Roppongi and has been running for more than a dozen of years.
Proofread by: Sean O’Hagan