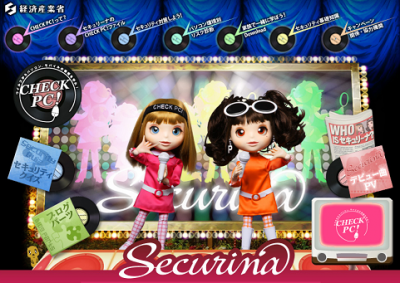 Securina is an another virtual idol unit by puppets newly appeared into Japanese otaku scene, as a part of “Check PC” campaign backed by METI, Ministry of Economy, Trade and Industry of Japan.
Shina, from Tokyo, who is unfussy and easygoing, likes Parfait. 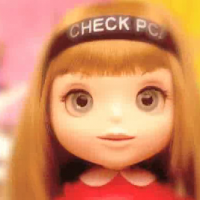 and Sena from Osaka, assertive and boyish, likes drive. 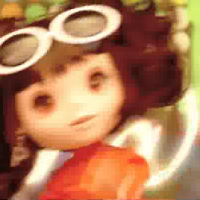 The “Check PC” campaign is supposed to enlighten the internet users about their security risk.
Here is their debut single promotion video. (pretty unstable. They should think about putting them onto Niconico Douga and YouTube, which I think unlikely happens though.)
I tried to listen and translate the first part of lyrics to English.

Watch out! P-L-E-A-S-E!
The day you disappear from me
The day your data disappear from my PC
Won’t show to anyone, but those are precious photos.
It freezed PC, freezed me. Freezed!
(spoken)
Oh, what? What happenned? Really? Gee. I’m in panic!
My secret photo is leaked to the Internet!
PC freeze, check please!
No one can be exception.
Forewarned is forearmed.
It’s not a joke.
That makes me blue.
So, so early, frequently check your PC, please! 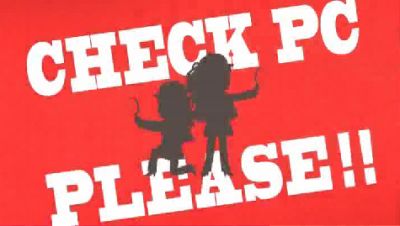 Securina’s profile and how they become the first information security idol in Japan are also explained.
There are also security comic, check-list, self-exam and more to tell people about computer virus, phishing, fraudulent access, etc.
Securina blog widget (“Blog parts” in Japanese) is also provided.
[update] Impress Internet Watch reports that METI is going to run television commercial and train/bus posters, also 101,000 posters will be distributed to schools and libraries all over the nation.
via, again, Hideyuki Yoshikawa’s blog from which we recently covered Japanese Social Media scene and Social Media Prism.