Golf Digest Online (GDO in short) suspended the entire service because they found malicous attacks and the website tampered.   GDO is a subsidiary of a golf magazine publisher, and one of Japan’s most popuar website selling golf goods and enabling golf course booking on-line.    It is also highly ranked as active e-commerce websites.   They found some unintentional links to malicious destinations in the e-mail distributed to customers, and it may cause virus-infecting customers’ PCs.
According to GDO’s announcement, they have been making efforts to resume service after temporary suspention, but they learned the website required entire suspension and system modification to avoid further damages.
I’ve never heard such a long time and large range of suspention since Kakaku.com‘s case as far as I remember, which was an entire service suspention of the popuar price-comaprison website for several days in 2005 because of the similar reason.
GDO says no customer’s private information is leaked out of the server.
GDO was founded in May 2000, and listed on the TSE Mothers Market in April 2004.   GDO’s stock went down by 9.61 percent from yesterday’s closing price.

GDO notifies the users of service suspension as shown below: 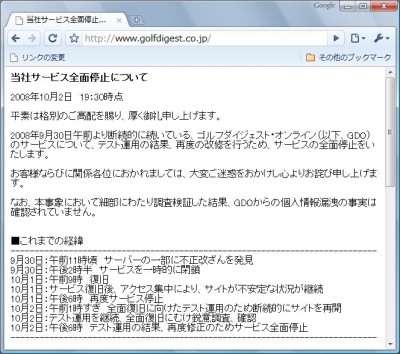 Golf Digest Online [J]
(temporarily suspention notice appeared instead of its usual screen, as of the time the article was written)
[Update] GDO was recovered on 10th of October, after 10 days down. Their release explained it was SQL injection attack. Release [J]