Today, March 5, 2013, many users reports are circulating Twitter and other social media, that their Chrome browser do not let them open some Japanese websites, including major ones. 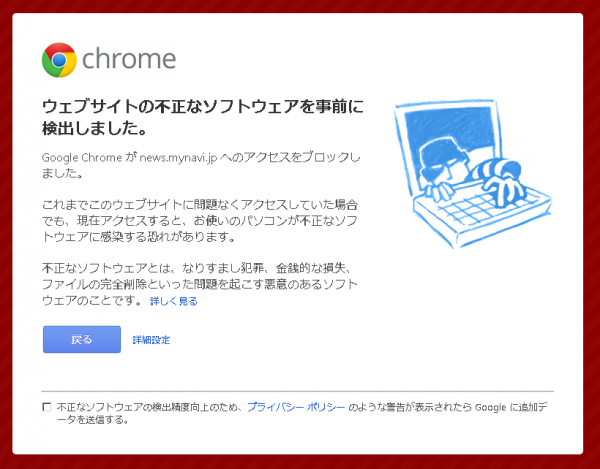 The sites alleged by Google includes a national newspaper Mainichi.jp, a popular music ranking site Oricon Style, MyNavi News, one of the most popular 2-channel summary sites Hachima-kikou, Soccer King, UGC site Piapro, etc. A popular website widgets provider Blogpeople.net is also blocked and that is resulting hundreds of personal sites’ block using their widgets.
Internet Watch reported this and wrote that other popular sites like Pixiv, Niconico and others were blocked in February 4.
[Update] Sankei reported [J] this phenomenon and got a comment from Google Japan. Google Japan PR told them that those sites were blocked because there were possible danger to break users’ PC and smartphone. They also told that they can not comment how many sites were blocked, and by what reason for each specific site.